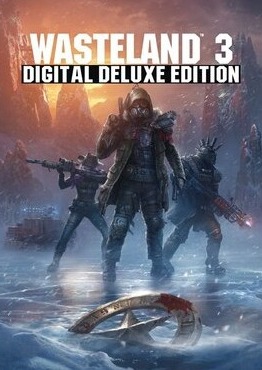 The Wasteland 3 Digital Deluxe edition bolsters your adventure into post-apocalyptic Colorado with digital guides, novellas, art, and the official soundtrack.

In the game, players need to make various choices, which would have different impacts on the game's world and the story. The game introduces a vehicle that the players can use to traverse the world and store supplies. The main campaign can be played cooperatively with another player.

Wasteland 3 is set in the freezing wastelands of a post-apocalyptic Colorado. The player takes control of two members from Arizona Ranger Team November, who survived after an attack when arriving in Colorado.

Their mission is to liaise and help the local ruler, known as "The Patriarch", in order to earn his support for the Rangers in the issues in Arizona. Once arrived and settled, the rangers discover the Patriarch wants to rein in his 3 heirs who have gone wild, as well as pursue his strong and brutal rule over Colorado.

As the story unfolds, Rangers discover the extent of the Patriach's brutality, and are contacted by NPC Angela Deth (a returning character from previous Wasteland games) in a push to overthrow the Patriarch. Player must then decide of the final course of action to take.

Wasteland 3 was announced by inXile Entertainment in September 2016. Wasteland 3 is being developed using the Unity game engine. The development team is composed of people who worked on Torment: Tides of Numenera (2017).

The game was scheduled to launch on Linux, PlayStation 4, Windows and Xbox One in Q4 2019. After Xbox Game Studios acquired the company, inXile hired more staff for the game's development and delayed its release date to early 2020.

The game's budget was three times more than Wasteland 2. The additional budget was mostly spent on implementing conversational scenes and hiring voice actors.

It was delayed again due to inXile's remote working conditions from the COVID-19 pandemic., while the Mac and Linux versions have been postponed to an undisclosed date due to developer's "decision to focus Wasteland 3’s initial release on Windows 10, Xbox One, and PlayStation 4".It was eventually ported to Linux and macOS in December 2020.

Further expansion of the story is planned through downloadable content in the future.

The soundtrack received special attention from inXile's Brian Fargo when he hired Mary Ramos, known for her work as Quentin Tarantino's music supervisor to create music for Wasteland 3.

Inspired by the idea of future civilizations not having context for the meaning or intent of a piece of music they might find, the soundtrack includes post-apocalyptic versions of Welcome Back (Kotter), the Green Acres theme song, Wang Chung's Everybody Have Fun Tonight, as well as American anthems and bible hymns.

Mark Morgan (Wasteland 2, Fallout, Fallout 2) returned to add his unique take on an atmospheric score for the post-apocalypse.

The game received generally positive reviews upon release, getting a score of 85/100 from critics on review aggregator Metacritic.

It was nominated for the category of Best Role Playing at The Game Awards 2020.