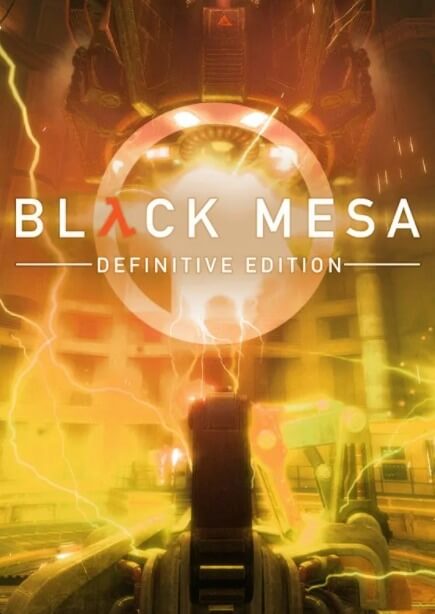 Following the first release of Black Mesa, the team announced work on a Definitive Edition, or Black Mesa 1.5, revamping non-Xen levels from the original Valve design to make them more challenging, as well as to take advantage of new lighting features available in the Source engine. This free update was released on November 25, 2020.

Black Mesa is a first-person shooter that requires the player to perform combat tasks and solve various puzzles to advance through the game. From a design standpoint, the core gameplay remains largely unchanged from the original base Half-Life game; the player can carry a number of weapons that they find through the course of the game, though they must also locate and monitor ammunition for most weapons.

The player's character is protected by a hazard suit that monitors the player's health and can be charged as a shield, absorbing a limited amount of damage. Health and battery packs can be found scattered through the game, as well as stations that can recharge either health or suit charge.

However, unlike Half-Life: Source, which merely featured the original game's assets and geometry ported to the Source engine, Black Mesa has been purpose-built from the ground up to take full advantage of the newest versions of Source, not just for its graphical capabilities, but for its myriad updates to the game's physics engine, puzzle complexity, and platforming capability.

The artificial intelligence of the enemy characters has also been improved over Half-Life to provide more of a challenge, with some of the combat spaces redefined to provide more options to the player.

In addition, several narrative and design changes have been made to account for the numerous story threads presented via retcon in Half-Life 2. While most of the general design and progress through the game levels remains the same as Half-Life, the largest change in Black Mesa is the reworking of the game's final chapter, Xen, which was generally considered the weakest part of the original game.

The plot of Black Mesa is almost identical to Half-Life's storyline. Like in the original game, the player controls Gordon Freeman, a theoretical physicist working at the Black Mesa Research Facility.

He is tasked to place a sample of anomalous material into an Anti-Mass Spectrometer for analysis, using the Mark IV Hazardous Environment Suit to do so safely. However, the sample causes a "resonance cascade", devastating the facility and creating an interdimensional rift to an alien dimension called Xen, bringing its alien creatures to Earth.

Freeman survives the incident, finds other survivors, and is tasked to make his way to the surface to call for help. Upon reaching the surface, however, he finds that the facility is being cleansed of any living thing - human or alien - by the military. Freeman learns from the surviving scientists the only way to stop the alien invasion is to cross over to Xen and destroy the entity keeping the rift open.