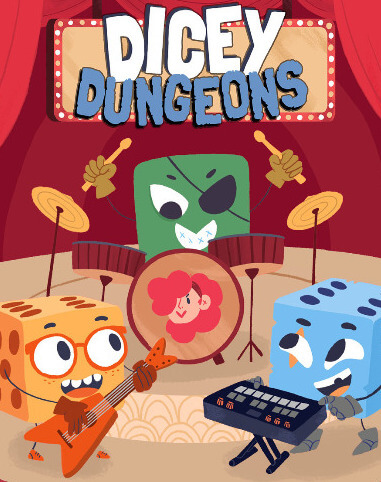 
Dicey Dungeons is a roguelike, deck-building game developed by Irish game designer Terry Cavanagh. It was released for Microsoft Windows on 13 August 2019. Ports for the Nintendo Switch, iOS and Android are scheduled for 2020.

Dicey Dungeons combines elements of roguelike games with deck-building games. The game takes place on a game show-like backdrop, where Lady Luck challenges adventurers, each having been turned into a dice, to complete a dungeon with a rather unlikely chance of winning their freedom. The player takes one of six characters, which defines the type of equipment they will start with. The player then moves their character across a dungeon map, where there are various encounters with monsters, treasure chests, health items, shops, and upgrade stations, along with exits to the next level. The goal of each run is to reach the lowest level of the dungeon and defeat the boss. Doing so unlocks the metagame progression, such as unlocking additional characters, or new episodes for existing characters that introduce new rulesets that make runs more difficult.

When encountering a monster, the combat takes place in a turn-based manner. On their turn, the player is shown their equipment, each which has slots for one or more dice to be added, and then a random roll of the number of dice their character currently possesses. The player then places each dice into one of the equipment slots; when all slots are filled, this creates a combat effect. For example, a sword may have a slot for a single dice, and when a dice is slotted, it will do the damage shown on that dice. Some slots have specific requirements, such as an odd or even number, or dice values less or greater than some number. Some equipment or abilities can alter the dice rolls, allowing the dice to be reused. The player continues to slot dice into equipment and abilities until they have exhausted their dice for the turn, or end their turn early. Their opponents have similar equipment with dice slots, and arranges their attacks in similar manner. There are various buffs and debuffs that can be triggered through equipment from both the player and enemy. Combat continues until either the player character's health or the enemies' health drops to zero. If the player-character's health falls to zero, then the game is over and the player must restart the game. If the enemy is defeated, the player gains in-game monetary rewards and character experience. By gaining levels, the player-character gains more total health as well as an extra dice that is rolled. The player may also get new equipment that they can equip on the character at any time outside of battles. Shops in levels can be used to buy new equipment, trade equipment, or other features. Upgrade stations can improve the effect of one piece of equipment.

Terry Cavanagh announced Dicey Dungeons in May 2018, after about three months of prior development, with an in-progress free version available for users to try up to this point. Cavanagh had planned to produce a commercial version of the game for release later in 2018. Dicey Dungeons is inspired by one of the first roguelike deck-builder games, Dream Quest.

The game's art was created by Marlowe Dobbe, while its music was composed by Chipzel.

Dicey Dungeons was ultimately released on 13 August 2019 for Microsoft Windows, macOS, and Linux personal computers. Cavanagh plans to release ports of the title for the Nintendo Switch, iOS, and Android by 2020.

Dicey Dungeons has received generally favorable reviews, according to aggregator Metacritic. The game has been called a good introduction into roguelike deck-building games. The PC release of the game was among the best-selling new releases of the month on Steam.