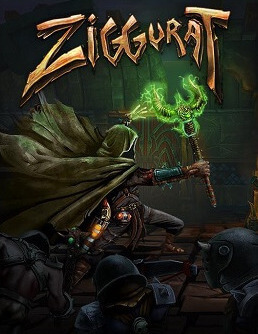 Ziggurat is a first-person shooter dungeon crawl video game developed and published by Milkstone Studios. The game was released for Linux, Microsoft Windows, and OS X in October 2014 after being available for two months in early access. The game was later released for the Xbox One in March 2015, and the PlayStation 4 in April 2015. The game is largely inspired by Heretic and Hexen: Beyond Heretic, classical first-person shooters.

Ziggurat is a first-person shooter dungeon crawl video game with roguelike elements. Levels and encounters are procedurally generated and include bosses, trap rooms, spells, and treasures. During gameplay, extra weapons and perks can be unlocked, and leveling up and randomly generated content to add additional variety.

Ziggurat was developed by indie video game developer Milkstone Studios. The game was initially released in early access on Steam for Linux, Microsoft Windows, and OS X. The game left early access with a full release on 23 October 2014. On 20 March 2015, the game was released for the Xbox One through the ID@Xbox program. A PlayStation 4 version was released in North America on 21 April 2015, and Europe on 22 April 2015.

Ziggurat received generally positive reviews from critics upon release. Aggregate review website Metacritic assigned scores of 76/100 for the PC and Xbox One versions, and 79/100 for the PlayStation 4 version. Some critics likened the game to Raven Software's shooters Heretic and Hexen: Beyond Heretic.