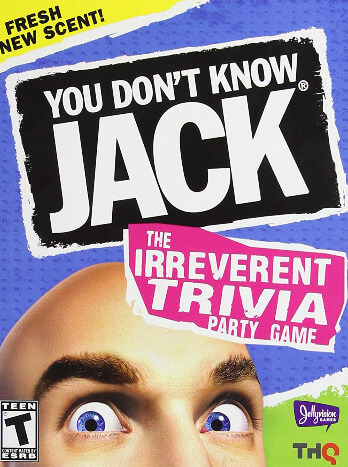 You Don't Know Jack is a 2011 party video game developed by Jellyvision Games and published by THQ. It was Jellyvision's first entry in the You Don't Know Jack series after taking an eight-year hiatus. The game was released in North America on February 8, 2011, for Microsoft Windows, Nintendo DS, PlayStation 3, Wii and Xbox 360 platforms. The game took advantage of online connectivity and other features of modern gaming consoles. A single player iOS port was released about two months later, but was later pulled in anticipation of a more robust client based on the Facebook version of the game.

The game is structured around a fictional game show emceed by Cookie Masterson (voiced by Tom Gottlieb), in which the players answer ten multiple-choice questions, and then compete in a final "Jack Attack" round. Answering quickly and correctly earns virtual money to track the players' scores, while incorrect answers are penalized. As per the game's motto, "the irreverent trivia party game", the questions often combine general knowledge with popular culture references and verbal wordplay to determine the correct answer. Unlike the earlier releases which randomly presented questions, the 2011 game provides more than 73 episodes with a predefined set of questions, and with further episodes to be made available as DLC, only available on the Xbox 360 and PlayStation 3 through both consoles' respective online stores.

The game, on consoles, supports both offline and online play (with the exception of the Wii which lacks online multiplayer) with up to four players, while the Microsoft Windows and Nintendo DS versions only support two local players and lack features such as online play and access to download various DLC Packs. You Don't Know Jack was generally well-received, seen as a humorous return to form for the series, though the lack of online play or additional content for the Windows version was criticized.

You Don't Know Jack is played out as a fictional trivia game show for one to four players, with the goal to win the most virtual money at the end of the game. Each game uses a pre-defined set of ten questions from over seventy episodes, titled by the name of the show's fictional sponsor. Most questions are multiple choice, providing one correct and three incorrect answers, along with a short timer that starts once the question has been completely presented. All players play at the same time, entering their choice of answer before the 20 second timer runs out. If a player is correct, they get a base dollar amount plus a bonus defined by how quickly they answered, while if they miss the question, they lose a similar amount of money. Failing to answer does not cost the player any money.

Each player in multiplayer games is also given a single opportunity to "screw" another player, forcing them to answer the question in a much shorter time period. If the selected player answers incorrectly or fails to answer the question, they lose money which is gained by the player using the screw. However, if the selected player answers correctly, they gain additional money taken from the player using the screw.

The game's trivia is based on general knowledge from several fields including science, history, and geography, combined with contemporary entertainment, celebrities, and other news items; the game, as well as the series, is often described as "high culture meets pop culture". For example, one question asks the players to identify which Jennifer Aniston film title would most likely have been suited for a hypothetical romantic comedy penned by Albert Einstein about the interactions between neutrons and electrons, the answer being "He's Just Not That Into You". In addition to the usual questions, each episode typically features a "Dis or Dat" question. This question gives the players seven words or phrases which they have to identify as one of two possible classifications, or in some cases, both. For example, one Dis or Dat series asks the players to identify terms that would be features of a Nexus One phone, Nexxus shampoo, or both. In offline play, only one player participates, while other players try to steal by getting it right if the main player gets it wrong. In online play, all players play the Dis Or Dat simultaneously. Players are also urged to look for the "Wrong Answer of the Game", which is hinted at by the show's sponsor; for example, in an episode sponsored by a baby crib company, the answer "Cat's Cradle" is the Wrong Answer of the Game. Choosing the correct Wrong Answer does not penalize the player but instead rewards them with a large monetary bonus. Other questions are presented in the standard multiple choice format but use recurring concepts, such as questions based on a fortune cookie message, or ones read through Cookie's ventriloquist dummy incorporating a speech impediment that may make the question harder to understand.

After ten questions are completed, the final round of the game is the "Jack Attack" where all players compete against each other. Prior to the round, a brief clue is shown to the players to describe a relationship that they must match, for example "BFF" (Best friends forever). The game then shows one word or phrase, and then cycles through other phrases which the players must match. If players respond to the wrong phrase, they lose money; only the first player to buzz in at the correct time wins and earns money. After seven such phrases, the total scores are added and the winner is determined.