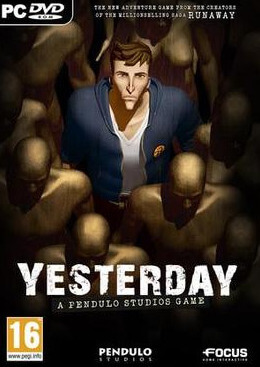 Yesterday (known in Spain as New York Crimes) is a 2012 graphic adventure game developed by Pendulo Studios and published by Focus Home Interactive. It follows the story of John Yesterday, a man hired to investigate the murder of homeless people in New York City.

In 2016, Yesterday was followed by Yesterday Origins, which serves as both a prequel and a sequel to the first game.

In 2011 in New York, homeless people are disappearing one after another, their bodies found lifeless. Meanwhile, a Y-shaped scar appears on the hands of seemingly unrelated people. Henry White, a young and rich heir dedicated to a charitable organization, and his friend Cooper, are the first to investigate. They soon cross paths with the enigmatic John Yesterday, whose memory seems to have been wiped clear, and who finds himself dragged into this incredible story.

Due to economic turbulence in Spain, Yesterday was developed on a tight budget. Felipe Gomez Pinilla noted that it was created with "one-quarter of the budget that we made Runaway: A Twist of Fate". Josué Monchan of Pendulo compared the game's central conceit to that of Planescape: Torment, but adapted to an adventure game rather than a role-playing game format.

Shuva Raha of Adventure Gamers commented: "Sleekly packaged and eminently playable, Yesterday conceals the darkness of the human mind within a beautiful artistic canvas; drawing you in with glimpses of dreadful secrets and leaving you shocked, yet satisfied, with its twisted narrative." Alasdair Duncan of Destructoid wrote in his review that, "Impressive effort with a few noticeable problems holding it back. Won't astound everyone, but is worth your time and cash." Chris Watters of GameSpot wrote, "Yesterday's unsteady narrative is disappointingly brief, though solid puzzles and nice visuals make it a pleasant diversion."