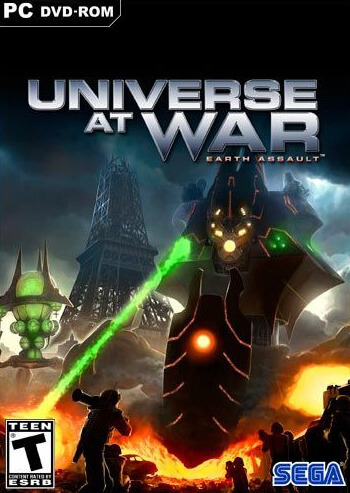 Universe at War: Earth Assault, begins in the year 2012 when an alien race known as the Hierarchy lands on Earth to strip-mine the planet. Before their landing, observatories and scientists on Earth gave warning of aliens but the human race, as a whole, is not able to organize a unified military front against the alien forces. Because the Hierarchy has vast military experience from invading and destroying other planets in the universe, the human race is not able to withstand their forces.

The Novus (a race of machines who fight the Hierarchy to avenge their fallen creators) arrive just in time to save Washington, D.C. where the U.S. military has made its last stand. They then proceed to establish bases, using guerrilla tactics to harass the Hierarchy while investigating why the Hierarchy has delayed in using their ultimate weapon "the Purifier", to utterly eradicate all life on Earth and proceed to strip mine the planet. Over the course of these missions the Novus field commander Mirabel, a cloned member of Novus' creator species, manages to befriend the human General Moore, in charge of leading what's left of the US forces after the initial Hierarchy invasion, and together they are able to launch an attack on a Hierarchy Material Conduit and use it to enable Mirabel to board one of their command ships, learning that Kamal Re'x, the overseer in charge of the Hierarchy forces on Earth has purposefully delayed the Purifier's activation in order to use it to destroy the Novus forces when they arrive on Earth before scuttling the command ship to kill Mirabel. She manages to escape from the crashing ship but is unable to warn the Novus forces before they launch an attack on the Novus command base, damaging the portal that Novus were planning to use to return to Earth and forcing the Novus leader, known only as the Founder, to sacrifice himself to prevent it from exploding and destroying what's left of the Novus forces.

With the Novus portal destroyed and their forces scattered Kamal gives the order for the Purifier to be primed for activation, however, while distracting the Novus from the Purifier, Hierarchy field commander Orlok accidentally trips an ancient alarm in the Egyptian pyramids, and the Masari, asleep beneath the Earth's oceans, begin to waken. Though the Masari mothership initially creates a signal that prevents the Purifier from being used, the Hierarchy bombard the ship from orbit and Orlok boards it to destroy the jamming signal transmitters.

Orlok, who has been questioning Kamal's intentions prepares to separate with others who follow him. Nufai, a spy working for Kamal, used to be part of a species that the Hierarchy has since eliminated. He tells Orlok that he would be happy to overthrow Kamal's regime, so Nufai is sent to secure the Purifier while Orlok tries to make an alliance with the Masari queen, but instead finds her son, Prince Zessus. The prince and his forces join Orlok as he tries to capture a communication center to contact the others who want to separate from the Hierarchy. But Kamal Re'x appears with a massive force of troops, and Orlok almost defeats him, but Nufai shows up and helps Kamal destroy Orlok, revealing that he was working for Kamal the entire time. Nufai is appointed commander and they begin to use the Purifier to destroy the Earth. Prince Zessus is captured but is freed by a soldier who managed to escape. They find more humans captured in other encampments and join forces with them.

Gameplay is split between three modes, two of which are further divided into different game types.

The first mode is single player. These are games that are played exclusively by one human player against AI-controlled opponents. This mode contains the campaign and scenario game types. In Campaign, the player controls one of the four factions, depending on which part of campaign is being played, and plays through various battles, accomplishing predetermined objectives to progress along the storyline and eventually "beat" the game.

Scenario mode gives the player a choice of one of the three main factions (Novus, the Hierarchy or the Masari) and then allows the player to choose a global situation and then take over the world. This mode is split between global strategy, which involves attacking neutral or enemy territories, constructing global structures and collecting resources; and tactical combat, in which the player must attack an enemy in an occupied territory in order to gain control of it, or defend one of their territories from an attempted invasion.

The second mode is the standard RTS skirmish mode. The player is given the option of playing against up to three opponents on the Xbox 360 or seven opponents on the PC. These opponents can be either AI controlled, or human controlled over an internet connection. The players are each given a base and a construction unit and must build up their forces to achieve domination of the chosen game map.