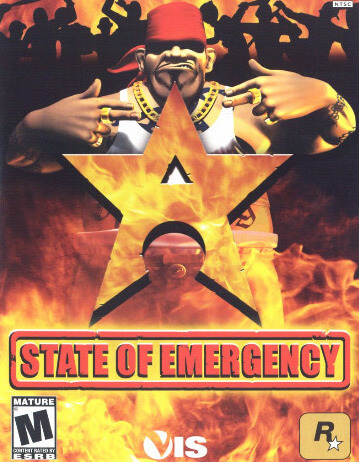 
State of Emergency is a beat 'em up video game developed by VIS Entertainment and published by Rockstar Games for PlayStation 2 and Xbox, and by Global Star Software for Microsoft Windows.

In 2023, the United States government was weakened by an economic crisis. In response, the American Trade Organization, most commonly known as "The Corporation", builds a para-militaristic force and overthrows the government, taking over the United States of America and establishing a corporatised totalitarian police state. Years later, in 2035. An underground resistance named "Freedom" began a campaign of terrorism and soon sparked a national riot. The Corporation declares a state of emergency. The game takes place in the fictional Capital City. The player joins Freedom in an attempt to overthrow The Corporation; they must play as one of a selection of five characters who each have their own unique backgrounds.

The player is given the choice of choosing their characters to play as, however can only choose two and others need to be unlocked.

Roy Macneil AKA "Mack" MacNeil was a cop for fifteen years before he was fired from the force for refusing to open fire on a group of rioters looting a Corporation grocery store. A highly respected and high-ranking officer, MacNeil's dismissal resulted in a city-wide strike of protest by his fellow officers. The Corporation retaliated by replacing the entire force with their own security firm. MacNeil and his fellow officers continued to protest, eventually uncovering evidence that Corporation was funding organized crime outfits to harass non-Corporation businesses. When the ex-officers attempted to air their findings, key members were assassinated, prompting MacNeil to go into hiding. He has since been instrumental in organizing the underground revolutionary group, Freedom.

Anna Price AKA "Libra". Anna was an up-and-coming criminal attorney who once believed in the Corporation model of rebuilding America until she was blackmailed by the security forces to falsify evidence against political prisoners. When Anna refused to railroad her clients and threatened to expose Corporation, she paid a horrible price. A car bomb planted by Corporation thugs killed her husband and daughter, but she survived the blast. Believed to be officially dead, Anna has now hooked up with Freedom seeking revenge on the fascist state.

Hector Soldado AKA "Spanky" Spanky remembers the way his neighbourhood used to be. Although it wasn't always the nicest place to live, it now seems like paradise compared to the veritable war zone that it has become. Overrun by state sponsored death squads and gangs, the Corporation has launched a war of attrition against the forgotten people of Spanky's neighbourhood. Once a hardened gang member, this charismatic figure has now turned his efforts to organizing his community into an armed resistance against the Corporation.

Ricky Thang AKA "Freak" or "Phreak" Ricky was orphaned in high school when his parents were arrested as political dissidents and were never seen again. Ricky went into hiding with other runaways before he was recruited by agents of Freedom. As Ricky's father used to run a PC repair shop, he has been using PC's since he a child, and has become a prolific hacker and phone phreak. He is personally responsible for several attacks against Corporation's infrastructure, which first attracted the Freedom movement to put the hacker to good use.

Edward Raymonds AKA "The Bull" The Bull graduated from Mesa High and joined the armed forces before the Corporation takeover. He was discovered by a sports agent while playing for the army's football team, and was recruited to play professionally. The Bull enjoyed a legendary career until the Corporation bought the professional football league. When he refused to participate in Corporation-sponsored match fixing, he was framed for illegal drug use and served five years in prison. With his future bleak and reputation destroyed, The Bull was ready to go take out as many of the men responsible as he could. The Bull now uses his experience to train new recruits to Freedom and lead organized attacks against the Corporation.

By July 2006, the PlayStation 2 version of State of Emergency had sold 700,000 copies and earned $28 million in the United States. Next Generation ranked it as the 90th highest-selling game launched for the PlayStation 2, Xbox or GameCube between January 2000 and July 2006 in that country. Combined sales of the State of Emergency line reached 900,000 units in the United States by July 2006.

State of Emergency received "mixed or average" reviews on all platforms according to video game review aggregator Metacritic. The game's strengths were considered to be the value for money as a budget title, the simplistic fun offered, the technical achievement of having hundreds of people running around on a modest system, and the satirical sense of humor. Weaknesses cited include gameplay that might be considered too simple, and a poor multiplayer mode on the PC.