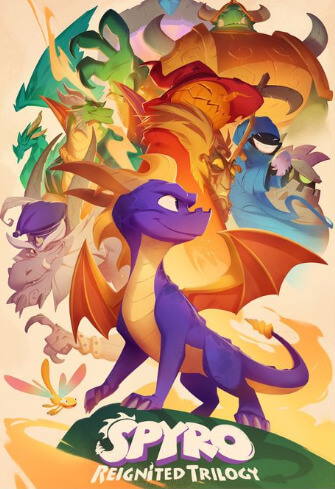 Spyro Reignited Trilogy is a platform video game developed by Toys for Bob and published by Activision. It is a collection of remasters of the first three games in the Spyro series: Spyro the Dragon, Spyro 2: Ripto's Rage! and Spyro: Year of the Dragon. The game was released for the PlayStation 4 and Xbox One in November 2018, and for Microsoft Windows and Nintendo Switch in September 2019.

Discussions around the revival of Spyro the Dragon began as early as 2014. In July 2014, former Sony Computer Entertainment chairman Andrew House stated that his team was considering bringing Spyro back, adding that he believed longtime fans would be interested in revisiting a character from their youth. Later that same year, Insomniac Games CEO Ted Price also stated that making a new Spyro game was a possibility. In 2017, developer Vicarious Visions stated that they were aware of how high the popular demand was for a revival of the classic Spyro series following the release of their Crash Bandicoot N. Sane Trilogy remaster.

The realization of Spyro remakes was originally teased in April 2018 when several media outlets received a package with a purple egg from someone under the alias "Falcon McBob." The Reignited Trilogy was officially revealed a few days later on April 5, 2018. After initially being scheduled for release on September 21, 2018, it was delayed and released on November 13 of the same year. The physical release of Reignited Trilogy contains the full game of Spyro the Dragon, as well as a subset of levels from Spyro 2: Ripto's Rage! and Spyro: Year of the Dragon. The remaining data must be downloaded as part of an in-game update. At E3 2019, versions for Microsoft Windows and Nintendo Switch were announced and were released on September 3, 2019.

Unlike the N. Sane Trilogy, development of Reignited Trilogy was a more collaborative effort between Toys for Bob and Insomniac Games. In the early planning stages, the staff from Toys for Bob brought their concept sketches of the titular character to the original team and held several discussions on how the character should look, with especially strong input from Ted Price. One of the key goals of the Reignited Trilogy, according to art director Josh Nadelberg, was to "get Spyro right". This involved putting Spyro's model through rigorous stress tests to explore the range of emotions and expressions that could be yielded before and after the discussions with Insomniac staff. Because Insomniac Games could not provide source code or original assets to use as a reference, Toys for Bob utilized an in-house emulation tool called "Spyro-scope" which showed the schematics of a level's geometry and revealed patterns in enemy pathfinding.

Tom Kenny, who voiced Spyro the Dragon in the original Ripto's Rage! and Year of the Dragon, reprised his role in Spyro Reignited Trilogy after 20 years with re-recorded voice lines, including the first game in which Spyro was originally voiced by Carlos Alazraqui. Stewart Copeland, the music composer of the original trilogy, wrote a new main theme for the compilation, though did not write any other new tracks for the project. The rest of Copeland's score for the trilogy was re-recorded by Stephan Vankov, an employee of Toys for Bob, with the game including an option to freely choose between the two soundtracks. Controls were updated for modern platforms in several key ways, such as shooting fire set to the back right button and camera control set to the right analog stick, with an option to revert to the original control scheme at any point from the pause menu. Reignited Trilogy uses the Unreal Engine 4 game engine. The game also received development assistance from Sanzaru Games, whose previous contributions include producing The Sly Collection.

A gameplay demo of Spyro Reignited Trilogy was playable at E3 2018. GameSpot noted that while the games were graphically overhauled, the layouts of each level remained the same as in the original games, including the location of enemies and items.

Spyro Reignited Trilogy received "generally favorable reviews", according to review aggregator Metacritic. The game reached first place on the UK all-formats sales chart in its first week. While it sold less than Pokémon: Let's Go, it outsold both its Pikachu and Eevee versions individually. It was also the best-selling PlayStation 4 game in its first week in Australia.

Spyro Reignited Trilogy won the award for "Family/Kids Title of the Year" at the Australian Games Awards, and was nominated for the Freedom Tower Award for Best Remake at the New York Game Awards, for "Game, Classic Revival" at the National Academy of Video Game Trade Reviewers Awards, and for "People's Choice" at the Italian Video Game Awards.