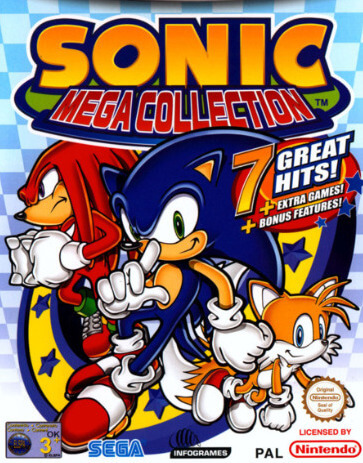 Sonic Mega Collection is a video game compilation developed by Sonic Team and published by Sega in 2002 for the GameCube. The compilation contains twelve to fourteen games (depending on region) originally released on the Sega Genesis. Ten of the included games are installments of the Sonic the Hedgehog series, while the remaining two to four games are only related to the series through its publisher, Sega.

According to the director, Yojiro Ogawa, the purpose of the compilation was to introduce younger players to the original games in the Sonic series. The games are played through a Genesis emulator developed by Sonic Team themselves. Outside of the games, the compilation includes Sonic-themed videos and illustrations, as well as high-resolution scans of the instruction manuals and Sonic the Hedgehog comic covers.

Sonic Mega Collection received positive critical reception, being recommended for its large library of titles, great emulation, and its cheap market price. The compilation was re-released with eight bonus games as Sonic Mega Collection Plus for PlayStation 2, Xbox, and Microsoft Windows. This was followed by a new compilation for the GameCube, Sonic Gems Collection, which included more obscure and rare Sonic games such as Sonic CD.

Sonic Mega Collection features twelve to fourteen complete games in one retail unit. All games are ports of their original versions on the Sega Genesis. High-resolution instruction manual scans are included for each game. Also included is an Extras section featuring over 100 scans of Sonic the Hedgehog comic covers, illustrations of Sonic characters throughout the franchise's history, and a handful of videos promoting other Sonic games, including the beginning and end sequences to Sonic CD. In addition to the seven default games, three unlockable games are included that recreated the Sonic & Knuckles "lock-on technology" to allow for new modes and/or playable characters in each of the first three games in the Sonic the Hedgehog series. Also, four games published by Sega but not in the Sonic series could also be unlocked (two in the North American version).

Reviews for Sonic Mega Collection were generally favorable. Louis Bedigian of GameZone praised the controls as "top-notch" including that "even the thumbstick is usable, and it works flawlessly." Game Informer declared Sonic Mega Collection to be "perhaps the best compilation ever." Fran Mirabella of IGN christened the compilation as "a wonderful little collection that, while not perfect, is a great value." Jeff Gerstmann of GameSpot suggested that "if you're fiending for Sonic the Hedgehog and either don't have or are unwilling to drag out a dusty Genesis from the closet, don't hesitate to give it a shot." However, Johnny Liu of Game Revolution advised "just blow the dust off the old Genesis, because there isn't enough good extra stuff here." Nintendo Power described Sonic Mega Collection as "the ultimate compilation of Sonic adventures."

Reviews for Sonic Mega Collection Plus were also positive. Chris Baker of GameSpy decided that "despite its exclusions, though, Collection's large selection of titles for $19.99 is a tough thing not to recommend to anyone who calls himself a gamer. Even if a few of the games undeniably suck." Hilary Goldstein of IGN declared that "you can't find a better deal than 20 games for 20 dollars," and that "while not every Sonic game is a winner, the majority are. These games, though old, are superior to Sega's more recent 3D Sonic offerings." Aceinet of GameZone, while praising the compilation overall as "a nearly complete package of classic Sonic games," was critical of the emulation of the Game Gear games, saying that "while the emulation is spot-on for the games, having to put up with a black bar around the screen could be upsetting to some." Jeremy Parish of 1UP.com assured readers that "even with its shortcomings, it's still one of the most value-packed classic compilations available for any system -- as long as you like Sonic." Game Informer suggested that "if you grew up with these games, they're still a joy to play," and that "new converts to the Sonic fold will get a great introduction to the 'hog's history." GMR Magazine concluded that "if you're new to Sonic, for 20 bucks you really can't go wrong."

The PlayStation 2 version of Mega Collection Plus received a "Platinum" sales award from the Entertainment and Leisure Software Publishers Association (ELSPA), indicating sales of at least 300,000 copies in the United Kingdom.