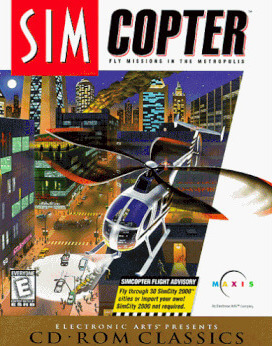 
SimCopter is a 1996 flight simulator video game, developed by Maxis. It puts the player into a 3D city. Like Streets of SimCity, SimCopter lets the user import SimCity 2000 maps into the game. It is also the first game to use the Sim language Simlish.

SimCopter puts the player in the role of a helicopter pilot. There are two modes of play: user mode and career mode. The user mode (free mode) lets the player fly around cities that they have created (which can be imported from SimCity 2000) or any of the 30 cities supplied with the game. However, user cities sometimes need to be designed with SimCopter in mind, and most of the time the player must increase the number of police stations, fire stations, and hospitals to allow for speedier dispatches. The career mode puts the player in the shoes of a pilot doing various jobs around a city.

While all other criminals roam the streets by foot, burglars drive through the city at high speed and are difficult to catch. All types of criminals can be arrested by picking up a police officer from the roof of a police station, and then dropping them near the criminal. Police cars can also be dispatched to aid in the arrest of a criminal. Criminals on foot can also be stopped by landing on top of them with the helicopter, which kills them, but this risks damage to the helicopter. Dropped police officers will callout whether or not they see the suspect, police officers need to be guided by the helicopter spotlight, if a police officer does not find a suspect, it will return to the helicopter. As soon as a police officer sees a suspect, she will keep chasing him until she gets him. Criminals can be slowed down by either using the spotlight or calling out the "Stop Criminal" message through the megaphone. Eight jobs are available, namely Traffic Jams, Fires, Rescues (which may result during fire missions), Catching Criminals, Riot Control, MEDEVAC, Transporting Sims, and Speeding Cars. Speeders can only be found by looking for a car that is belching exhaust behind it and squeals its tires making turns. Once a speeder is pulled over, the helicopter has to stay with it until a police car arrives to cite them for their reckless driving, or the speeder will take off again.

Money and points can be earned by completing missions. Money and points can also be lost if the player runs out of time or does not complete a mission. Missions will take points from the player after a set amount of time from the start of the mission while it remains uncompleted. Some missions will eventually be canceled resulting in a point loss or will not reward anything after completion. Missions like MEDEVAC or firefighting missions will result in large penalties if the victim dies or if the area gets destroyed by the fire. When the player has accumulated enough points, the game lets them move on to the next city. The player then has a choice of going into a new city of the same difficulty or advancing to the next level. There are twelve levels of difficulty, with new types of jobs being introduced and previous types of jobs increasing in difficulty. Jobs will be randomly spawned around the city, but the player's actions can also create jobs.

The player starts with a small, weak helicopter that comes with just a megaphone and a bambi bucket; it can only hold two passengers. As the player accumulates money in the game, they can purchase better helicopters and new equipment. Some jobs require certain equipment in order to complete them, and better helicopters offer greater speed, handling, and can carry more passengers. Helicopters have a limited amount of fuel and must return to the hangar about once every half-hour to refuel, which costs money. If the helicopter runs out of fuel while in mid-air, the player can either attempt to keep the motor spinning and land it, or just let it fall to the ground and suffer heavy damage. If the helicopter remains intact after falling to the ground, it can be refueled at a highly inflated price.

Maps that have an Apache in them will also occasionally have a UFO that flies around. They abduct Sims with mysterious force (Sims will "dance" while they ascend), and also randomly shoot vertical beams that start fires if they hit trees or buildings. If the beam hits the player, the screen fades to white and the copter is instantly destroyed. If the UFO falls into the water, the player can rescue a surviving abductee for more points. If the UFO is shot down, the player receives 1000 points.

The game gained controversy when it was discovered that designer Jacques Servin inserted an easter egg that generated shirtless men in Speedo trunks who hugged and kissed each other and appear in great numbers on certain dates, such as Friday the 13th. The egg was caught shortly after release and removed from future copies of the game. Servin was fired for adding unauthorized content (which delayed the release of the game, and caused Maxis to miss Christmas season). He cited his actions as a response to the intolerable working conditions he allegedly suffered at Maxis. This caused a member of AIDS Coalition to Unleash Power (ACT UP), a gay AIDS organization, to call for a boycott of all of Maxis' products, a measure which Servin rejected. Some months later, a group named RTMark announced its existence and claimed responsibility for the himbos being inserted into the game along with 16 other acts of "creative subversion." Servin stated that he had received a money order of $5,000 from RTMark for the prank. It was revealed later on that Servin was a cofounder of RTMark.