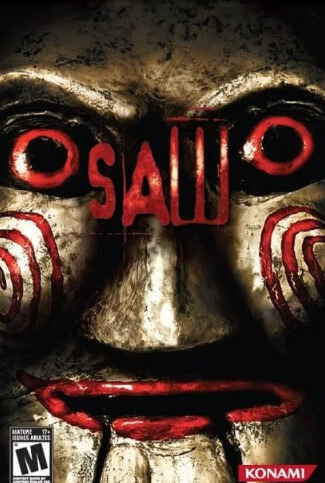 
Saw, also known as Saw: The Video Game, is a survival horror video game that was developed by Zombie Studios and published by Konami for PlayStation 3, Xbox 360 and Microsoft Windows. The game was released on October 6, 2009, in North America and later that year in other regions. The Microsoft Windows version was released on October 22, 2009. Part of the Saw film franchise, the game is set between the first and second films.

In Saw, The Jigsaw Killer has healed Detective David Tapp from his gunshot wound, and places him in an abandoned insane asylum to teach him a lesson in life appreciation. Obsessed, Tapp traverses the asylum and gathers clues along the way in hopes of apprehending Jigsaw. As he progresses through the asylum, he encounters several people with connections to him, whom he must save. The asylum also has inhabitants who are in games of their own, ordered to kill Tapp. Along the way, Tapp uncovers the origins of Jigsaw and the motives behind his tests. The development team brought in the Saw creators James Wan and Leigh Whannell to help with the storyline and create new trap designs for the game.

Upon release, Saw received mixed reviews. It was praised for the storyline and multiple endings, as well as the immersive environment that is true to the Saw film series. The controls and combat system, however, were panned by critics. Since Konami purchased the publishing rights after former publisher Brash Entertainment went bankrupt, Konami had a significant input on the games' final outcome. They stated that they had plans to make Saw their next big franchise as well as a spiritual successor to their other survival horror series, Silent Hill. A sequel, Saw II: Flesh & Blood, was released on multiple platforms on October 19, 2010.

Saw is primarily a third-person survival horror game with elements of the action genre. The player controls David Tapp, a former detective trapped in the Jigsaw Killer's asylum filled with traps. The primary goal of the game is to traverse the asylum and solve traps in order to escape. Tapp has several abilities in the game, such as the ability to search things like toilets and corpses to find items such as weapons, health, or clues he can use to fulfill his objectives. Items such as case files and cassette tapes are found hidden around the asylum, and provide additional information about the asylum's past and give background information about certain victims.

The game's combat system allows the character to block, counter-attack, and perform attacks to fend off enemies. There are over eighteen different weapons available to players, including lead pipes, mop handles, firearms, and explosives. Certain weapons may also be used for other purposes, such as cutting open a body to search inside, or breaking down a molding wall to reveal hidden paths. Weapons in the game deplete upon use in real time until they are rendered unusable. As a way to avoid combat, Tapp has the ability to rearm or place certain traps after activating them. For example, he can electrify water puddles or create and place explosive mines on one of "Jigsaw's Worktables". Tapp's health bar, once depleted, can only be restored by bandages or hypodermic needles, which can be stored in an inventory of items. When Tapp is losing health, the environment slowly fades to black-and-white until Tapp heals himself or dies.

At certain points in the game, the player will be joined by AI teammates that help Tapp. There are many points in the game where multiple paths are available that can be taken to avoid certain areas or uncover hidden items. Lighting plays a dynamic role in the game. While Tapp begins with a lighter, other light sources such as flashlights or camera flashes can be found later in the game. Minigames are a major part of the game. These include a searching game in which an X-ray view is used to avoid dangers like razors or syringes, and a game that involves grabbing a key before a "Pain meter" fills and wounds Tapp. Other puzzle minigames include powering fuse boxes, placing rotating gears in a box, and aligning steam valves. Doors rigged with shotguns attached to pulleys are in place all around the asylum. When the player encounters one of these doors, they must press a randomly assigned button before the pulley falls too far, or the gun will discharge. There are puzzles called "environmental traps", in which Tapp must use different elements in the environment, use the in-game camera, or go to certain locations to accomplish a task.

Saw, like its film predecessors, is set in the fictional Saw universe in an unnamed urban American city. The overlying storyline follows that of a man named John Kramer. According to the backstory in the film Saw IV, John encountered a series of events, including the loss of his unborn child, his diagnosis of an inoperable frontal lobe tumor, his divorce from his wife, and a suicide attempt that caused him to begin testing other people's will to live. These tests, which ironically killed many of his victims, and the fact that he symbolically carved a puzzle piece out of the flesh of his victims, soon earned him the alias "The Jigsaw Killer" from newspaper reporter Oswald McGullicuty. Due to the chronology of Saw, Jigsaw is still alive and his apprentice Amanda is still assumed to be a victim rather than an accomplice. In Saw, Jigsaw has just concluded the bathroom trap of Lawrence Gordon and Adam Stanheight, an incident that occurred at the end of the first film. David Tapp, a police officer who had his throat damaged by Jigsaw's knife and was later shot in the chest by a suspect named Zep Hindle, has been healed and is brought to Whitehurst insane asylum, an abandoned sanitarium with a reputation for medieval tactics and frequent patient abuse. The asylum has many areas, most of which contain a key trap scene for Tapp to solve. A large part of the asylum consists of cells that were at one time used to hold the criminally insane. Jigsaw placed traps all around the asylum to continue his tests of will for Detective Tapp and his apprentice, Amanda Young, who monitors Tapp as the story progresses.

Saw revolves around the Jigsaw Killer and his test subject Detective David Tapp, the games' protagonist. Jigsaw, a serial killer who is determined to spend the remainder of his life making people appreciate their lives, gives clues to Tapp as he progresses through the game. Clues are usually delivered by Jigsaw's puppet Billy. Tapp is a veteran detective for the local police force who was recently discharged for mental instability after the loss of his partner, Steven Sing, an event which led him to develop an obsession with Jigsaw. Throughout the game, Jigsaw attempts to teach Tapp to let go of his obsession and focus on survival.

In addition to Tapp and Jigsaw, there are six main characters who Tapp must save throughout the game. Amanda Young is a drug user who is secretly Jigsaw's apprentice. Jennings Foster is a corrupt CSI who framed an innocent citizen for a hit and run he committed. Melissa Sing is the wife of Tapp's former partner, Detective Steven Sing. She blames Tapp for her husband's death and has since become a neglectful parent to her son. Oswald McGullicuty is a newspaper reporter who coined the name "Jigsaw Killer" and accused Tapp of being Jigsaw. Obi Tate is an arsonist who seeks a test from Jigsaw to give his life a purpose. Jeff Thomas is the second survivor of Jigsaw's games, and has become suicidal after Tapp interrogated him relentlessly about Jigsaw.

There are also minor characters spread around the asylum. Most of these people have instructions to kill Tapp and obtain a key placed inside his chest by Jigsaw to free themselves. Some of these attackers have a Reverse Bear Trap and some have a Venus flytrap. Others are equipped with new, unique traps, and some have no traps at all. While not an attacker, a masked figure called "Pighead" is the antagonist. Pighead pursues Tapp around the asylum and watches over Tapp's game as per Jigsaw's instructions. At the end of the game, Pighead becomes the only boss battle.

Get Even
hit
upd
new