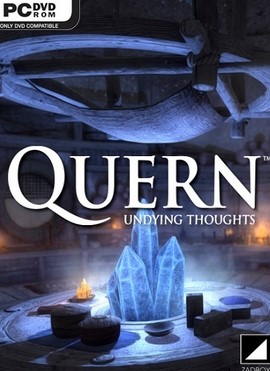 Quern – Undying Thoughts is an adventure video game by Zadbox Entertainment. It runs on Windows, Mac, and Linux, and has Oculus Rift support. The game was developed by four Hungarian graduate students, one of whom lives in the United Kingdom.

The plot involves a character arriving through a large gateway, which destructs upon their arrival, on the mysterious island of Quern with no memory of the past. There are dozens of puzzles to solve that open approximately 50 locked doors. All are needed to find a way off the island. There is no hostility or combat.

PCWorld gave the game 4 out of 5 stars, saying it was similar to Myst of old with excellent gameplay. Adventure Gamers gave it 4/5 stars. Metacritic gave it a positive score of 83/100.