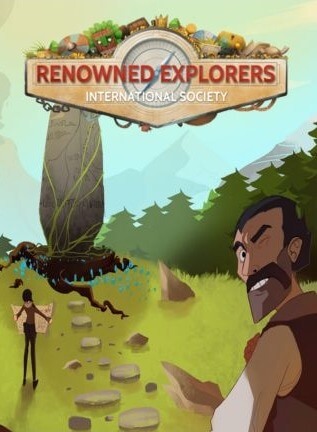 Renowned Explorers: International Society is a turn-based strategy adventure video game set in a fictitious 19th century historical setting. It was released 2 September 2015 as a boxed game for PC and on the Steam computer game platform. The game was inspired by adventure movies such as Indiana Jones, and retro-classic video games such as FTL. The game runs on an in-house developed engine called AbbeyCore, and was created by the independent studio Abbey Games.

After Abbey Games’ previous success Reus, a god-game released in May 2013 on the Steam computer game platform, they started development on Renowned Explorers: International Society. A bigger team was hired, and the beta was released in February 2015. After more than a year of development the game was released on Steam on September 2, 2015.

Renowned Explorers: International Society is a single-player turn-based strategy adventure game. The player assembles a group of 3 adventurers who each have their own unique skills and abilities with which he or she will play the game. The player can choose from 20 different explorers (4 additional ones with the expansion "The Emperor's Challenge") categorized as fighters, scouts, speakers and scientists, who each have their own unique character traits. With this group, the player can travel across the world and go on one of the procedurally generated expeditions in a quest to find legendary treasures. A typical treasure hunt follows the following steps:

Preparation This part of the game takes part on the world map. The player’s band of adventurers need to travel from place to place in turns to prepare for his or her expedition. With the knowledge, gold and status gained from previous expeditions, the player can buy gear, supplies and support in order to prepare for the next treasure hunt.

Expedition This section of the game is played on a map of a locale where the treasure is hidden. The player has to choose which route she takes, and this determines what she might encounter along the way. She will be confronted with difficult choices such as; do I aid the locals in this area but loose extra supplies or not? Inevitably, the player will be faced with an encounter.

Encounter – Attitude Gameplay This part of the game takes part on a Voronoi grid. The terrain is procedurally generated and the player’s adventurers are placed on the grid, faced off by the AI controlled locals. Each turn the player can move and perform actions with his adventurers. This is limited by the amount of action points each adventurer has. The player is faced with a choice how to approach the locals called ‘Attitude-based Gameplay’. These can be by:’

Fighting them with melee, ranged and area of effect attacks

Winning them over using cheers, charms and compliments

Scaring them away through insults, taunts and humiliation

However the player chooses to deal with the locals will have repercussions in the future, as the player’s band of adventurers will develop a certain reputation.

"It's a great idea, and the set-up suggests a light-hearted sense of adventure that tactical turn-based games rarely seem to pursue." PC Gamer - Phil Savage

"Abbey Games may not be a name you immediately recognize, but its god game Reus received some much-deserved attention. The studio has announced its new project, Renowned Explorers - International Society..." Destructoid - Jordan Devore