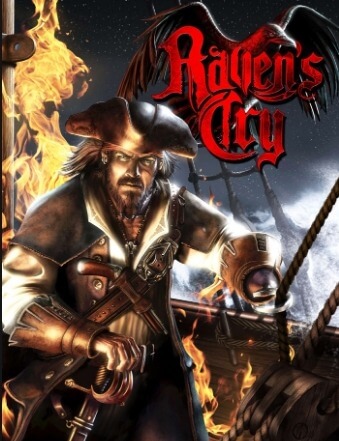 Raven's Cry is a 2015 action-adventure game that tries to interweave fictional events and characters with historical ones from the 17th-century Caribbean. The game is said to feature historically accurate architecture and pirates. The game follows the character of Christopher Raven, who was the only survivor of an attack by pirates, and is now seeking vengeance.

This game is no longer available on Xbox 360 according to TopWare Interactive. The game was re-released as Vendetta: Curse of Raven's Cry on 20 November 2015. As of 28 January 2016, the game was removed from Steam, but then made available again with mixed reviews on the site. Upon release, the game was panned by critics, and considered one of the worst video games of 2015.

The story is divided into chapters. In these chapters, Christopher, the player controlled character, is tracking down a particular pirate known as Neville Scranton, who he blames for leading some former pirates who took part in the massacre of the only people he has ever loved.

When he was a boy, Christopher Callahan's father, mother, and brother were massacred by a group of four pirates known as the Devil's Tines, led by Captain Neville "the Devil" Scranton. Neville cuts off Christopher's hand and leaves him for dead. He is rescued by a former slave turned outlaw, Marcus, who raises him as his own child. Christopher changes his name to Christopher Raven and grows up to be a ruthless and amoral pirate captain. He plans to seek revenge against the Devil's Tines, but is robbed of the opportunity when they are presumed killed during the 1692 Jamaica earthquake that sinks Port Royal into the ocean.

Some years later, after being tasked with assassinating a rival by the Spanish officer Tirado, Christopher is betrayed by Tirado and his ship and crew sunk. After acquiring a new ship, Christopher and Marcus stumble upon an adrift Dutch schooner with the crew massacred and the Captain impaled to the ship's wheel with a sword through the mouth. Recognizing this as the same way his own father was killed, Christopher realizes that Neville is responsible and is still alive. He vows to seek out Neville and have his revenge, in spite of Marcus advising him against doing so.

To locate Neville, Christopher seeks an alliance with the infamous vigilante pirate hunter Santorio. After helping Santorio defend his island base from a French navy attack, Christopher learns from Santorio that one of the Devil's Tines, Weedy, has been seen living as a drunken vagrant in the pirate hideout of Redonda. Christopher confronts and kills Weedy, learning that the Tines other than Neville have all retired and that another one of the Tines, Bloodfist Brady, has spent the last few years being cared for at a monastery on Blanco Island due to suffering from multiple debilitating illnesses and STDs. Christopher travels to the monastery only to find it burned to the ground by cannibal natives. He tries to retrieve Brady from the natives, but Brady is killed by them before Christopher can learn anything from him. In the process Christopher is also poisoned by a native arrow, becoming deathly ill.

Charlotte, a nun that Christopher rescued from the destruction of the monastery, takes Christopher to the friendly Carrac tribe of Aves Island, where the shaman Arko puts Christopher through a hallucinatory ordeal before sending him into an ancient temple where the cure for the poison is located. After being cured, Christopher learns from Charlotte that Brady spoke of his past and that the third member of the Devil's Tines and Neville's right hand man, Kensington, is located at the Arriya plantation on St. John island.

Christopher arrives at Arriya to find that the place has been taken over by Edward Avery, a wealthy businessman and rival of Kensington's. Christopher learns from Avery that Kensington has become a member of the Patriarchs, a shadowy cabal of wealthy and influential power brokers who secretly rule the Virgin Islands; Avery wishes to usurp Kensington's place among the Patriarchs, and Christopher undertakes a series of missions for him to undermine Kensington's position among them in order to weaken him enough so that he can be attacked. This culminates with Christopher assisting Marcus' Maroon companions in starting an uprising to free Kensingon's slaves and overthrow him. However, upon the successful completion of his mission Christopher is betrayed and captured by Avery, who is secretly in league with Neville. Christopher is rescued by Marcus and the Maroons, and Christopher leads his crew in attacking and burning down Arriya; in the process Christopher kills Avery's bodyguard Ray and leaves a crippled Avery behind to die in the fire.

Christopher finally confronts Kensington, who has lost everything due to Avery's manipulations, and learns that Neville is sailing to attack Santorio. After executing Kensington, Christopher learns that Marcus was injured during the uprising and has returned to his home in St. Lucia. When he goes to visit Marcus, Marcus confesses that he had been hired by Neville to locate Christopher's father and that he was the one who led him to Christopher's family. Christopher can choose to either kill Marcus in revenge, or spare him without forgiving him.