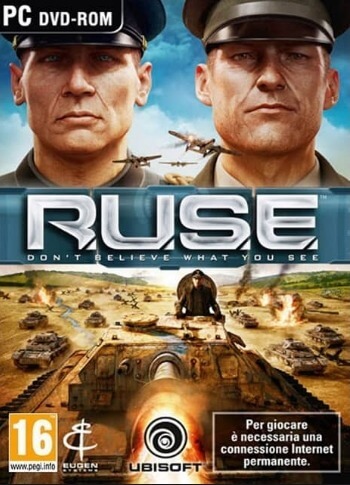 R.U.S.E. is a real-time strategy video game developed by Eugen Systems and published by Ubisoft which was released for Microsoft Windows, PlayStation 3, and Xbox 360, in September 2010. The game was subsequently released for macOS through Steam on November 15, 2011. R.U.S.E. is a strategic war game set during World War II and focuses on the invasion of Nazi Germany during late 1944. The campaign includes many historical and some fictional events. It focuses on information warfare instead of a brute-force approach. Players can use a series of ruses and decoys to trick their enemies and change the outcome of the battles. However, the outcome of the battles in the game also relies quite heavily on how a player manages their economy and which units they use. In December 2015, Ubisoft pulled the game from Steam due to the expiration of the military license. In 2018, the Xbox 360 version was released on Xbox One via backwards compatible release.

R.U.S.E. takes place during World War II. The game contains a single story arc, portrayed through the perspective of Joseph Sheridan of the United States Army. Sheridan, a Harvard dropout, joins the U.S. Army and eventually assumes control of the First Armored Division. The game opens in 1945 as General Sheridan liberates Colditz Castle to free an undercover operative, code named Nightingale, who knows the identity of an Axis informer, code-named Prometheus. Sheridan then reminisces to 1943 when he was a major during the Allied North African campaign, when leaked information led to devastating Allied losses at the Battle of Kasserine. Sheridan meets British intelligence officer Colonel Andrew Campbell, and working together, in spite of Sheridan's inept commanding officer General Weatherby, they are able to turn the tide of battle. Sheridan is promoted to lieutenant colonel for his efforts.

In 1943, Sheridan takes part in the Battle of Monte Cassino, and while he disobeys Weatherby's direct orders to confuse German intelligence, Sheridan is able to push the Germans back and open up the road to Rome. Sheridan is promoted to general and meets Kate Garner, an attaché from the American War Office. At a victory party, Campbell remarks that the Germans are not fully defeated yet and that Sheridan is turning into Weatherby now that he has been promoted.

In 1944, Sheridan is in command of US troops landing at Utah beach on D-Day, with Weatherby in command of Omaha beach. Sheridan is able to secure a beach head and defend it against counter-attacks despite Weatherby's inability to secure Sheridan's flank. The operation in Normandy is hampered by inaccurate information given to Campbell by the French resistance; this, along with remarks from Garner, strains Sheridan and Campbell's friendship.

Later that year, Sheridan is placed in command of forces in Operation Market Garden, and Weatherby is discreetly placed in command of forces "in reserve". After an exchange between Campbell and Garner, Campbell remarks that he cannot offer the same "incentives" as Garner and states that he will request a transfer. Despite Garner's insistence that Sheridan has "outgrown" Campbell, Sheridan is still clearly bothered by the British Officer's departure.

Despite deeply inaccurate information on Axis forces in the area, Sheridan is able to keep "The Highway to Hell" open. However the British forces at the final bridge to be secured are forced to surrender, thus ending Market Garden as a failure. Garner leaves for Washington D.C. for a new "promotion" leaving Sheridan feeling sorry for himself.

Three months later Sheridan and Campbell meet on the Belgian front, and the two make amends, with Sheridan apologizing and telling Campbell that "he was right and that they should have listened to Campbell". With Campbell's help Sheridan manages to hold onto the key city of Bastogne during the Battle of the Bulge despite Weatherby surrendering his forces. During the siege, General von Richtor, a German general who gave Sheridan much trouble in the past, personally requests Sheridan surrender. He reveals that the Germans have received orders not to take prisoners of war any more, but despite this, offers to guarantee the safety of Sheridan and his men if they surrender honorably. Sheridan refuses, only demanding to know how an honorable man like von Richtor could serve the Axis. After pushing back the German offensive Sheridan and Campbell interrogate General Von Richter upon capturing him. Learning that only the head of the German Intelligence Service, the Abwehr, Admiral Canaris, knew the identity of the spy Prometheus, but the Admiral had been arrested for plotting to kill Hitler.