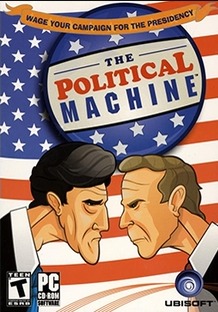 The Political Machine is a government simulation game from Stardock and the first game in the Political Machine series, in which the player leads a campaign to elect the President of the United States. The player accomplishes this goal by traveling from state to state and engaging in a variety of activities to either raise money or raise poll numbers.

Each game starts with the selection of a pre-created candidate or creation of a fictional candidate from one of the two major American political parties, the Republican Party and the Democratic Party.

Headquarters and fundraisers are possible, the effectiveness of which depends on various factors.

When enough money is accumulated the player can "invest" it in advertisements (either through newspapers, radio, or TV media). The effectiveness of these ads are determined by several factors. For instance, an ad supporting tax cuts will work better with Republican Texas than with Democratic Massachusetts.

A key factor in the game is the concept of "Stamina" and "Turns." In each turn, representing one week, a candidate has a set amount of stamina to engage in activities. For example, establishing or upgrading a campaign HQ costs more stamina than creating a newspaper ad.

A sequel, The Political Machine 2008, was released on June 16, 2008, with new characters introduced, such as Barack Obama and John McCain.

A second sequel, The Political Machine 2012, was released on July 31, 2012, with new characters introduced, such as Mitt Romney and Rick Santorum.

A third sequel, The Political Machine 2016, was released on February 4, 2016, with new characters introduced, such as Bernie Sanders and Carly Fiorina.