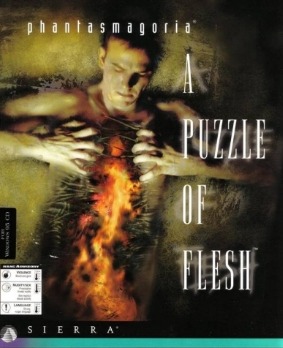 Download Phantasmagoria: A Puzzle of Flesh Free for PC Torrent

Phantasmagoria: A Puzzle of Flesh (also known as Phantasmagoria 2) is an interactive movie point-and-click adventure game released by Sierra On-Line. The game released in North America in November 30, 1996. Though technically a sequel to Roberta Williams' 1995 game Phantasmagoria, Puzzle of Flesh shares no connections with its predecessor in plot nor characters, as Sierra initially intended the Phantasmagoria title to be a horror anthology, with each installment of a different story and style. While not a critical or commercial success, A Puzzle of Flesh, like its predecessor Phantasmagoria, is remembered for its controversial violent and sexual content, which led the game to being heavily censored or banned outright in several European and Oceanic countries.

The player controls Curtis Craig, an introverted 26-year-old man who works at a pharmaceutical company. Curtis regularly has disturbing hallucinations when at his office, seeing flashes of gore or getting odd e-mails (for example, one claims to be from Hell offering him a job as a murderer).

Curtis was released from a mental institution one year before, and following the onset of his visions he has regular visits with a therapist. His mental health problems largely stem from childhood traumas: an abusive mother who committed suicide and a father who, before he died in an auto accident, was working on a top secret project at Wyntech, the same company where Curtis is currently employed. Curtis has repressed most of his childhood memories, and over the course of the game he remembers details that suggest his father was murdered by Wyntech for reasons related to the aforementioned project.

One day Curtis' workplace rival, Bob, is found brutally murdered in Curtis' cubicle. Though Bob was generally disliked by the whole office, Curtis had expressed the joking desire to kill him and feels apathy towards his death, which leads Curtis to fear he may have murdered Bob in a psychotic break. This incident impacts the myriad other relationships in the office. While Curtis has been dating his commitment-seeking coworker Jocilyn, he also becomes involved with a more adventurous coworker, Therese, who on a first date introduces him to the local S&M scene. Another coworker and best friend, Trevor, is an openly homosexual man, and Curtis admits to his therapist that he is attracted to Trevor.

After Curtis' superior Tom is murdered as well, Curtis suspects his boss, Paul Allen Warner, who had threatened Tom during an argument the previous day. The next day, Therese is found murdered after her date with Curtis, placing more suspicion upon him by the police. Curtis eventually discovers this is all connected to "Threshold," the project his father worked on with Warner. Decades prior, Wyntech discovered a rift leading to "Dimension X" in the basement of their building and sought to use it for monetary gain by selling teleportation technology to the United States government, performing experiments first with animal subjects and later mental patients supplied by the corrupt Dr. Marek, who was employed at the asylum where Curtis was later committed. Desperate for better results, Warner took advantage of Curtis' father, bringing the child to work and using Curtis as a subject—without his father's permission—although Curtis was quickly returned from the rift. The project was shut down when the military showed no interest, but reactivated when Warner discovered the inhabitants of Dimension X could synthesize any chemical desired at the cost of some components and a couple of "human specimens." Warner planned on sacrificing as many people as necessary in exchange for a highly addictive antidepressant/weight loss drug which would then be released on the market, causing the Earth's population to become reliant on the product and making Wyntech the most powerful corporation on Earth.

As Curtis comes closer to the truth, his therapist and Trevor are murdered, causing Curtis to finally confront Warner. Warner, however, is knocked out by a humanoid creature (identified in FMV scene selection as "the Hecatomb") that introduces itself as a manifestation of the "real" Curtis Craig. The child Curtis that returned from the rift is in fact an alien duplicate while the real Curtis was trapped in Dimension X, experimented upon, hideously mutated, and developed vast psychic powers—and madness—as a result. The real Curtis, acting through the Hecatomb, was responsible for the murders and hallucinations, with the purpose of driving the duplicate Curtis insane. This would allow the real Curtis to psychically take over the duplicate's body, regaining the life the duplicate unintentionally stole. The duplicate Curtis escapes the Hecatomb through the Dimension X portal, kills the real Curtis, and returns to Earth.

Jocilyn suddenly appears, revealing that she knows the truth. A message from the inhabitants of Dimension X is heard, asking Curtis to return since he doesn't belong on Earth. The player then has the choice of two endings: either Curtis chooses to leave, in which case he spends one last day with Jocilyn before departing, or he chooses to remain on Earth. If the player chooses the latter, the ending sequence shows Jocilyn happily talking about everyday life arrangements to a regretful-looking Curtis, who curls up an anxious fist beneath the table. The fist briefly morphs into a grotesque alien shape.

Prior to either ending, the scene implies Curtis puts the still-unconscious Warner through the rift. A post-credits scene in Dimension X shows the still-living severed head of Warner suspended in bio-organic matter.

The basic aspects of a point-and-click adventure game are here; as Curtis the player travels to various locations, interact with the often strange and eccentric people in his life, and collects items and solves puzzles.

A Puzzle of Flesh's gameplay features a standard point-and-click interface, played from a third-person perspective: the cursor, when waved over an object or area that can be manipulated, will highlight, and clicking it will initiate a live-action clip that furthers the game along. Inventory is stored along the bottom of the screen and a simple click-and-drag command will cause inventory items to interact with other objects.

Due to the large amount of graphic violence and sexual content, A Puzzle of Flesh came with password-enabled parental controls that thoroughly edited out the game's offensive content.

A Puzzle of Flesh also has a large number of comedic Easter eggs, which the player can achieve on a point system, although, due to some of the complex key commands one must perform to enable them, most of them are impossible to access without outside help. These Easter eggs range from simple sight gags and messages to minigames and hidden videos.

(0) Comments on "Phantasmagoria: A Puzzle of Flesh Full Version"