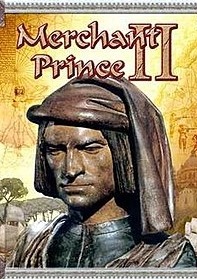 Merchant Prince II is a 2001 turn-based strategy game of economic, political, and military conquest. The game is developed by Holistic and published by Take-Two Interactive.

Merchant Prince II received "mixed" reviews according to the review aggregation website Metacritic. So little was added to gameplay that it was properly a rerelease rather than a sequel, and the changes to the graphics were considered uglier, with a zoomed-in and less user-friendly interface. ("End turn", for instance, was represented by an unlabeled wine glass.) It was largely panned by critics and even the positive review by IGN called it a "cheap reissue" and pardoned it only because of the difficulty of finding the original DOS games. Computer Gaming World opened its review, "Merchant Prince 2 is the kind of title that gives strategy gaming a bad name," and concluded with, "Mainstream consumers pulled in by the fascinating topic are—once again—going to feel ripped off, confused, dumb, and jaded toward turn-based strategy games." Kent Conrad found the implementation of the research tree "half-baked" and ended his review with "There is a good game hiding inside of Merchant Prince II, and that game is Machiavelli: The Prince. Get that instead."