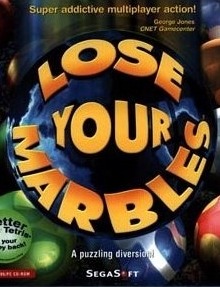 Lose Your Marbles is a puzzle game developed and published by Segasoft and released for the PC on August 31, 1997.

A version of the game was included in Microsoft Plus! 98.

In Lose Your Marbles the player moves each color of marbles to create matches on the playing field while the game drops new ones every few seconds. Whether played against a human or the CPU, the goal in Lose Your Marbles is to force the other player's board full of marbles. Creating matches of three, four, or five marbles clears those marbles from the player's board. In addition, a match of five will send marbles to the opposing player's board. The game in hard mode has a tactic after the player wins 6 games to change its skill and win every single other game. This cause the player to literally lose their marbles.

SEGA boldly claimed "More addictive than Tetris or your money back!" This was not a gimmick - SegaSoft actually would issue refunds for unsatisfied players.

Next Generation reviewed the PC version of the game, rating it three stars out of five, and stated that "Lose Your Marbles is actually quite fun, even if it doesn't grab players quite like Tetris or have the same staying power."