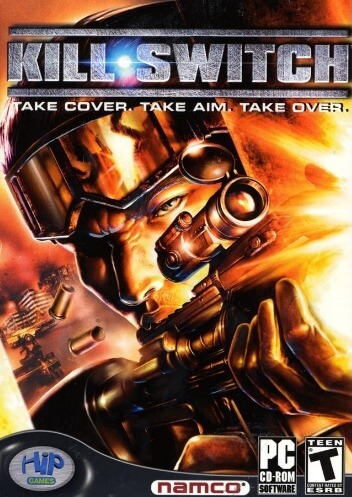 Kill Switch (stylized as kill.switch) is a third-person shooter video game developed by Namco USA in 2003 for PlayStation 2, Xbox and Microsoft Windows. A Game Boy Advance adaptation was released in 2004. The GBA game was created independently of Namco, due to a licensing deal with Destination Software.

The most distinguishing characteristic of Kill Switch is its cover system, a mechanic that has the player character taking cover behind objects and around corners in a manner similar to Namco's own Time Crisis series of light gun shooters as well as Koei's third-person shooter WinBack and Hideo Kojima's stealth game Metal Gear Solid 2: Sons of Liberty. However, Kill Switch was the first third-person shooter to feature the cover system as its core game mechanic, though Gears of War would popularize it.

Protagonist Nick Bishop (voiced by Marcus McCollum) is a super-soldier remotely controlled via direct neural connection by a man known only as "Controller" (voiced by Chuck McQuary) in a series of combat missions designed to bring "the North" and "the West" to war. Profiteer Archer (voiced by Adam Baldwin) plans to benefit by selling the technology used to control Bishop, who gives Controller headaches on recollection of suppressed memories featuring a woman and the phrase "Say my name". Moments before launching a biological warhead, Controller is killed by a surge triggered when a woman known as "Duchess" (voiced by Adrienne Wilkinson) seizes control of Bishop. Sent to attack Controller's base, Bishop's memories are eventually restored: the woman from his memories was his new wife, who Archer killed when he captured Bishop to sell the technology inside him. Freed, Bishop kills Archer in a final assault and walks away.

Kill Switch was regarded as having a thin plot and simplistic level design, but the gameplay mechanics such as the cover system were considered engaging. It was compared to the Time Crisis series. The Xbox version of the game was said to contain enhanced graphics over the PS2 version. GameSpot awarded the Xbox version a 6.9 out of 10.

The GBA version of the game was similarly received, with IGN calling it a "solid portable action title" and awarding it a 7.5 out of 10.

Naughty Dog's Uncharted: Drake's Fortune, which began development in 2005 and was released in 2007, also took inspiration from Kill Switch, which Uncharted's lead designers Evan Wells and Amy Hennig credited as inspiration for the game's cover system. Other examples of shooters that featured Kill Switch-inspired cover systems include the 2005 third-person shooter CT Special Forces: Fire for Effect, and the 2006 games Tom Clancy's Rainbow Six: Vegas, a first person shooter released in the same month as Gears of War, and Killzone: Liberation, an isometric shoot 'em up released a month before Gears of War.