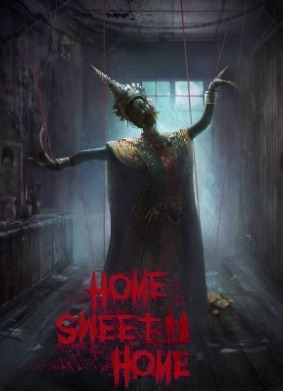 It is available on Windows and on VR devices. The game focuses on the main protagonist Tim. His life has drastically changed since his wife disappeared. One night, he wakes up in an unknown place. While trying to find an exit, he is chased by a female ghost. Players have to discover the mystery in Tim's house and find his missing wife Jane.

The game is about stealth and hiding. If the ghost finds the player in the hiding spot, the game ends. Exploration is also important, which is complimented by the fact that many areas have no dangers. Instead the goal is to find diary pages or puzzle items.

Home Sweet Home is developed by Yggdrazil Group, a visual effects company primarily working on film post-production. Home Sweet Home is the company's first venture into game development; the project was led by Sarut Tubloy. Development took about 21⁄2 years, and went through multiple major revisions. The team originally planned to make a mobile game, but changed to PC and restarted work after 7–8 months. They made another revision at 15 months, after receiving feedback from Steam Greenlight. They made another revision after releasing a demo on 16 November 2016, spending an extra three months on revising the story. Home Sweet Home has been planned as a series, and the story was written with possible sequels in mind.

The game demo was released on 16 November 2016, earning an enthusiastic response. In this footage the player is a protagonist who suddenly wakes up in an unknown place. The player meets the ghost girl and solves some problem, but the stage ends at the exit. The shelf blocks the way out then the ghost scares the player into jumping.

The full game was released on Steam on 27 September 2017. It offers 3 hours of gameplay.

Home Sweet Home was positively received; critics commended the game's use of Thai mythological elements to create its frightening atmosphere. According to an IndieGames.com review, "Home Sweet Home demonstrates the ability to create terror without shoving gore and violence down your throat 24/7." Writing for The Telegraph, Olivia White describes the game, "It's filled with fantastically terrifying setpieces as you're forced to sneak, run and hide from the spirits who are after you."