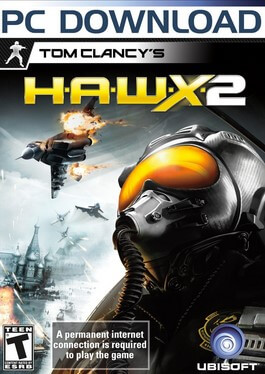 The game features a story campaign which can be played solo or with cooperation of three other players. The player is often in control of Major Alex Hunter, a pilot from High Altitude Warfare – Experimental (HAWX) squadron but gets to play one or two missions as other pilots, including Captain Dimitri Ivanovich Sokov of Russian Air Force, Lieutenant Colin Munro of the British Royal Navy and Colonel David Crenshaw of HAWX squadron. In most missions, the player pilots a combat aircraft, but occasionally, the player gets to remotely control an unmanned aerial vehicle (UAV). Also in one mission, the player assumes the role of a guns operator in an AC-130 Spooky.

The gameplay experience has significantly changed from that of the previous game. Unlike the previous game, the player is no longer given an option of a plane or weapon load-out for the story missions. In addition, the player assumes the role of a wingman while flying as part of a flight, as opposed to a flight leader; therefore, it is no longer possible to issue orders to other wingmen.

The game has changed focus from fire-and-forget missiles towards operator-guided or unguided ordnance. New weapons include stand-off missiles, precision missiles and precision bombs, all of which are forms of operator-guided weapons with slight differences. Joint Strike Missiles, anti-air and ground missiles which were available in all planes and configurations of the previous game, are no longer available in the story campaign and have their damage and range reduced in other modes. Multi-target anti-ground missiles are no longer available. To further discourage the player from using guided missiles, some enemy planes constantly dispense an endless supply of flares, making guns the only option.

H.A.W.X 2 puts more emphasis on co-op games. According to G4TV, "it feels like the game is primarily intended to be a co-op game." The game adds a new class of electronic warfare planes designed specifically for co-op games. These planes carry ECM devices but do not have guns. In a co-op game, a player flying these planes must keep a distance from the action; his or her participation amounts to a rather dull job of keeping friendly planes within the support range of his or her ECM device. The game also features a multiplayer deathmatch in which up to eight players can play against each other.

The PC version of the game supports mouse and keyboard for controlling planes; however, only keyboard may be used to control AC-130 guns or operator-guided ordnance.

The game begins with Crenshaw (now a Colonel) piloting a routine patrol mission in the Middle East. After stopping an insurgent attack, a volley of cruise missiles is fired at the Prince Faisal Air Force Base where Crenshaw is about to land. One of the missiles disables Crenshaw's aircraft, resulting in Crenshaw being captured by the enemy. A Ghost Recon squad and an AC-130 gunship from H.A.W.X rescue Crenshaw. After his rescue, Crenshaw stays on-board an aircraft carrier due to an injured arm and commands a remote surveillance operation with agent Drachev of the Russian Voron agency. (This agency is briefly introduced in Splinter Cell: Conviction.) Following the recon mission, H.A.W.X and the U.S. military conduct a large scale military operation to eliminate the insurgents and secure the region. The operation spans three days of fighting during which H.A.W.X flies several missions.

Meanwhile, Russia is at a civil war with its separatists. Despite the best efforts of its pilots – Colonel Denisov and Captain Sokov – Russian military bases fall to the separatists. In the aftermath of the fall, the Russian Air Force is sent to support Spetsnaz in recovering stolen nuclear warheads from the separatists in Romaniskhov. They recover only two out of the three warheads and their transport aircraft is shot down during extraction. Denisov and Sokov provide air support to the best of their abilities, but their commanding officer General Morgunov orders them to blow up the Nevskaya Dam, allegedly to flood the region and prevent the warheads from falling into enemy hands. In the aftermath, a nuclear warhead is detonated in the Romashkino oil field, crippling Russia's energy supplies. Consequently, Russian Ultranationalists seize control of Russia and start a war with Europe to obtain the much-needed resources by force.