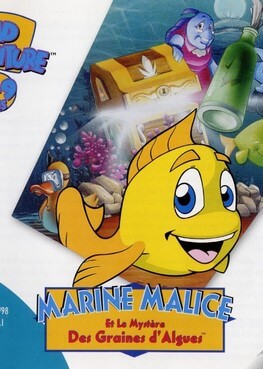 The adventure begins in the Atlantic Ocean when Freddi Fish visits Grandma Grouper with a gift of flowers. Grandma Grouper is sad and when asked why, she informs Freddi that her treasure chest full of kelp seeds has been stolen. As a result, her garden began to wilt and left them with no food. Courageously, Freddi promises to find Grandma Grouper's stolen treasure chest. This puts a smile on Grandma Grouper's face and she gives Freddi her last peanut butter and jellyfish sandwich to take on her journey.

After going a short distance from Grandma Grouper's house, Freddi finds her friend Luther trying to swim loop-de-loops. She shows Luther how to do it and he tries again, hitting his head on some coral. A bottle is knocked loose and slowly lands on the ground. When Freddi and Luther investigate, they discover that a note has been lodged inside the bottle. After reading the note and finding a message telling them where the treasure is, Freddi and Luther begin their journey to find the missing kelp seeds.

The game makes use of a simplified adventure system where a single click on a certain spot allows the player to pick up items, go to another location, talk to characters and find trivial but fun stuff in the screen. Clicking on an item in the right place allows Freddi to make use of it. Most puzzles require the player to make exchanges with characters and use items to get to inaccessible areas. The locations of the clues in bottles and the trails to follow for the treasure chest are randomised in every new game.

"Freddi Fish and the Case of the Missing Kelp Seeds" received mixed reviews from various critics. GameRankings lists a 60% score for the Windows version based on 1 review, Metacritic has an average score of 70 out 100, Allgame gave a 4-star rating, GameZone rated 7 out of 10, Adventure Gamers gave a 3-star rating, and Unikgamer gave a 7 out 10 score. It also received over 20 awards.

Freddi Fish and the Case of the Missing Kelp Seeds.torrent
(Downloaded [222])
15.2 Kb