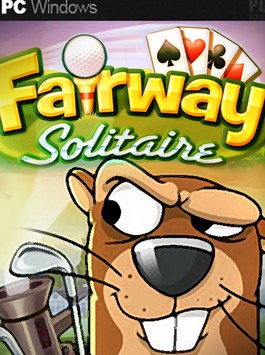 Fairway Solitaire is a casual video game based on the classic card game solitaire and developed by Big Fish Studios. The game is digitally distributed and is available from Big Fish Games. A demo of the game was also released. Both the demo and the full version include a Daily Challenge option where players can play up to three limited edition courses, and trophies and Golf Bucks are awarded for participants in the Daily Challenges.

Inspired by Caddyshack,citation needed Fairway Solitaire presents players with a modified type of solitaire with a golf theme. In the game, players use golf clubs and playing cards to clear the table. The goal in Fairway Solitaire is to play through a collection of 70 courses with each course offering a different type of challenge. Once the challenge is met, the next course is unlocked and the player advances in the tournament. Players may be awarded trophies for accomplishing various tasks. Often they are rewarded along with in-game cash or prizes. In addition to the main tournament, daily challenges are available for players to win trophies. Players' scores are recorded and ranked against all other players on the same platform. Additionally, statistics are kept for each player and trophies are awarded for predefined achievements. Adding to the challenge of the game is a gopher, known as Gutsy McDivot, who will stop at nothing to get revenge on the golfers who killed his ancestor, Bravetooth. As the player progresses, cutscenes are shown of McDivot making a contraption he dubs the "Golfinator".

Each Fairway Solitaire course offers water hazards and sand traps. Water hazards are special water cards which must be cleared from the board before the cards to its right are revealed. Sand traps are sand cards which are not revealed until the 'sand wedge' card is uncovered. Occasionally, a player will reveal an iron card. Iron cards have a specific golf club on them and act as magic playing cards without breaking the current drive. A person may play a club at any time to continue adding to a long drive. The clubs are restricted to the 2-9 irons. During Fairway Solitaire game play, wild cards are randomly revealed. One may choose to randomly select an event or pay to skip the risk. The cost to skip is either two cards or $300. These wild cards offer varying opportunities and challenges.

The Fairway Solitaire Club House has a golf shop wherein players can purchase equipment to help them during tournament play. The equipment assists the player during actual game play or during wild card play. Items may vary depending on gender. Handicaps which improve a player's performance on a course can be purchased in the shop with Golf bucks, an in-game currency that is earned through gameplay. Golf bucks can also be used to purchase additional courses for the game.

Fairway Solitaire Blast has a similar base mechanic to the original Fairway Solitaire iOS game; however, the game's scoring is based on traditional solitaire. The developers say it is, "The arcade version of the original Fairway Solitaire game... faster and less complex." There is a map where a player progresses from one course to the next. Each course has 18 levels and each level has three "holes". You must use 30 cards or less to completely clear the cards from the table in all three holes of each level. The player must also successfully complete the objectives within the three holes of the level or they will fail to progress to the next level. You can earn between one and three stars on each level.

In the first two courses, a player learns all of the available "power-ups". A power-up card is a wild card that can help to either clear the table of cards, prolong a run, or achieve the level objective. Power-up cards randomly appear from the draw pile and are also available for purchase with hard currency.citation needed

The development team at Big Fish Studios often uses Fairway Solitaire to celebrate important global events, such as the World Cup as well as special occasions in lives of the team members. For instance, when one of the members got married, the Daily Challenges were all wedding-themed. When another member had a baby, the Daily Challenges were baby-themed. They've frequently honored their players in the game by including their names in background art and naming Daily Courses after them. The player community is very positive and appreciative; reflecting the attitude that the developers have shown them.