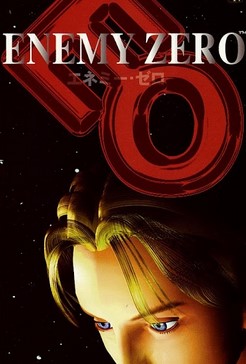 Enemy Zero is a 1996 survival horror adventure video game for the Sega Saturn, developed by WARP and directed by Kenji Eno. After its Saturn release, it was ported to Microsoft Windows. It was the second game to star the digital character Laura Lewis, the first being D, and the third being D2. Laura is voiced by Jill Cunniff of the band Luscious Jackson in the English versions and Yui Komazuka in the Japanese version.

The real time component of Enemy Zero is unique. Enemies are invisible, and location is only possible through the use of sound, with notes of different pitch helping the player find the distance and direction of enemies. Additionally, every gun in the game must be charged up immediately before each shot, and charging a shot for too long will cause the charge to dissipate, after which the charging must start over. Since all available guns have very limited range, this makes timing crucial; beginning to charge the gun too late or too soon will allow the enemy to reach Laura, resulting in an immediate game over. Reloading the gun and moving the character around are mechanics that have been made intentionally slow, which stimulates players to avoid combat and direct contact with the alien enemies as much as possible. In the early segments of the game, avoiding detection is not only recommended; it is required, since the player has no means to defend themselves without a gun.

Aboard the AKI space craft, a space station dedicated to biological research, Laura Lewis is in a deep cryogenic slumber. The jets of the chamber dissipate as the craft's emergency systems are activated. Laura is awakened by a large detonation on her deck. Outside a door marked with the letters E0, something of great strength is trying to break free.

The door is thrown down, and the hallway is filled with a bright, incandescent light, followed by a horrific growl. Pipes and the remains of the steel door shift around, as if being stepped on. Laura, unaware of what is happening, uses the video phone above her sleep chamber to contact one of her crewmates, Parker. Laura watches in confusion as Parker looks away from the monitor, to his room's entryway doors. A screech sends him backing up to reach for his gun. Laura watches as Parker is mutilated by an unseen enemy.

Getting dressed and grabbing her gun, Laura heads out to learn what attacked Parker. As she ventures through the ship, Laura's earring-shaped "guidance system" gives her aural warnings of invisible enemies (seen escaping in the intro sequence) roaming the ship's corridors. Laura meets up with Kimberley, another crewmate, and they make a plan to rendezvous with the other survivors. On their way Kimberley is attacked by an enemy and disappears, forcing Laura to make the journey on her own. She meets up with George, the ship's resident computer scientist, as well as David, her lover, and together they plan to head for the escape shuttles. Exploring the deceased captain's study, Laura discovers a log file that reveals that goal of the mission is to capture the enemies and bring them back to Earth for use as biological weapons on behalf of Vexx Industries, and that the crew is expendable in case of an accident.

David is attacked by one of the enemies, and when Laura discovers his corpse, she learns that David was actually an android. She performs a body-scan on herself, and finds that not only is she also an android herself, but that one of the enemy larvae is developing in her neck. George confronts her and tries to wipe her memories, but is attacked and killed by an enemy. When Laura heads for the escape pods, she finds Kimberley again, who kills the larva nesting inside of Laura, and reveals that she and Parker were assigned by Vexx Industries to supervise the mission. Kimberley then triggers the ship's self-destruct mechanism, and leaves Laura to join Parker, killing herself while cradled up next to his corpse. As Laura heads for the escape shuttle, her guidance system runs out of battery, but instead she receives guidance from David, whose consciousness has been uploaded to the ship's computer systems. Laura reaches the escape shuttle just in time as the AKI blows up behind her, and she enters cryogenic sleep one more time as she makes the return voyage to Earth.

Enemy Zero began life on Sony's PlayStation. Its unveiling at the 1996 PlayStation Expo in Tokyo was described by journalists as the highlight of the show. Irritated by Sony's failure to meet even a third of preorders for the PlayStation version of D (and to a lesser extent, their policy that all marketing for third party games had to be approved by them), at a press conference during the expo Kenji Eno made a shocking move. Eno showed a preview of Enemy Zero. At the end of the clip the PlayStation logo appeared, but slowly transitioned into the Sega Saturn logo, indicating that the game would now be a Saturn exclusive. Despite popular opinion that the Saturn cannot handle 3D games as well as the PlayStation, Eno commented "...the PlayStation and the Saturn aren't that different, so moving it Enemy Zero to Saturn wasn't too difficult." Fumito Ueda, director of the cult video games Ico and Shadow of the Colossus, worked as an animator on this game, before becoming a video game director. The game was in development for nine months.