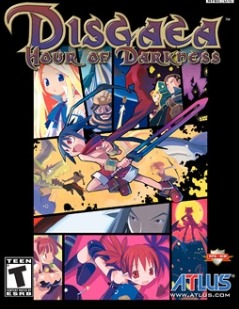 A direct sequel, taking place 10 years after the end of the game, named Disgaea D2: A Brighter Darkness was announced for PlayStation 3 in 2012, and stars the main cast (and additional new characters) of Hour of Darkness.

In 2004, the game received a spiritual sequel called Phantom Brave.

Disgaea is a tactical role playing game. Battle gameplay takes place on a map divided into a square grid. The player controls a squad of humanoid units and monsters, which each occupy a single square of the grid and do combat with a group of enemies. Depending on the character and attack selected, the player will be able to deal damage to a specific enemy unit or a designated region of the map. Combat ends when all enemy units or all of the player's units are destroyed.

Humanoid characters may lift and throw other units across the map in order to allow allies to move further or force enemies to keep their distance. This even allows the player to capture enemies by throwing them into the base panel; these enemies then become allies, and can be used on subsequent maps. The chance of capturing an enemy in this manner depends on several factors. Failure to capture the enemy will result in the death of all characters inside the base panel, and the enemy will survive.

Some maps in Disgaea contain Geo Panels, which are represented as squares on the floor of the map of a particular color. Colored objects on the map known as Geo Symbols may be present on either Geo Panels or regular, uncolored squares on the map. These Geo Symbols can usually be thrown. When a Geo Symbol sits on a Geo Panel, it gives all Geo Panels of the color it sits on a property, such as making all units on them invulnerable, or decreasing the HP of friendly units on those panels by 20% at the end of each turn. When a Geo Symbol is destroyed on a Geo Panel of a different color than its own, it causes panels of that color to change to the color of the Geo Symbol and damages units on those panels. If another Geo Symbol is on one of the panels when it changes, it too is destroyed, and the Geo Panels begin to change color and properties again, creating a chain reaction. This chain reaction can be of any length that can be supported by the number of colors of panel and symbols on the map, the amount of "chain" gained with each square increasing by one every Geo Symbol. The higher the chain, the more the bonus gauge fills. Some Geo Symbols have the color "clear" and cause the Geo Panels to become regular map squares when destroyed. Removing all of the Geo Panels from a map will cause a blast of energy which hurts all enemies on the map and results in large bonuses for the player, referred to in the manual as the Panel Termination Bonus.

Laharl's castle acts as a hub, allowing the player to access the other locations in the game without physically having to travel between the castle and a desired map. Each episode of the game gives the player access to a new set of maps, which must be completed in order to proceed in the plot. With the exception of the Item World and the Dark Assembly, all maps are accessed by speaking to a dimensional gatekeeper. With few exceptions, maps can be accessed and played again at any time, occasionally with minor changes, such as boss levels, where the boss will be replaced by a high level generic enemy.

Disgaea has only one pair of stores where items may be purchased, consisting of an armor shop and a weapon shop within Laharl's castle. These shops are described in-game as the Netherworld branch of the Rosen Queen Co. The overall quality and types of the items sold in these shops can be changed through proposals to the Dark Assembly. A hospital where characters may be healed in exchange for payment is also present in the same area of the castle and rewards Laharl and company by giving them items when they pay specific amounts of money for treatment.

In order to perform specific actions outside of combat the player must address the Dark Assembly. To create new characters, improve the inventory of the castle store, or unlock new maps Laharl or other members of his party must present a proposal to the Dark Assembly, who will vote on whether they should or should not provide aid to Laharl's party. Prior to voting, senators in the assembly represent their predilection toward the party visually, glowing blue if they favor that character or red if they do not. If they are glowing red, senators can be bribed with items from the player's inventory to sway their vote in the player's favor. If a proposal fails to receive sufficient votes, the player may attempt to pass the bill anyway by choosing to "persuade by force" and attempting to defeat opposing senators in battle.

The proposals available to place before the senate depend on the number of promotion examinations completed by a character; these examinations consist of a battle between a handful of monsters and a single character on the floor of the Assembly. Each proposal to the Dark Assembly costs "mana", which is built over time by individual characters as they defeat enemies in combat. The amount of mana gained depends on the enemy's level.

Laharl's party may also enter the Item World from the castle, going inside an item in their inventory in order to increase its attributes. The world associated with an item contains up to 100 randomly generated levels. Inside the Item World, monsters called Specialists raise the statistics of the item they are in when defeated. Often, the maps are full of Geo Symbols.

Each floor has a gate, a special map square that can be used to go to the next level in the Item World. However, a monster with the unique class "Gate Keeper" will sometimes block the gate. The Gate Keeper must be defeated or forced to move to use the gate and progress through the Item World. Defeating every monster on the map can also allow the player to progress.

Every ten levels has an item boss. The strongest of each type of weapon and the three ultimate items each contain an Item God 2. Defeating these bosses also increases the attributes of the item. The Item World can only be exited at the end of every tenth level containing an Item Boss, or at any other time by using an item called 'Mr. Gency's Exit', a play on the phrase "Emergency Exit". Since many items contain stronger monsters than are ever found outside the Item World, the Item World is often the only way to acquire rare and powerful weapons.

All games from the serie "Disgaea"