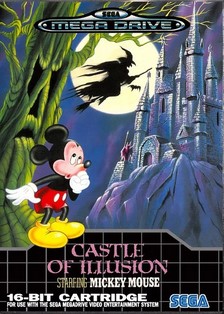 Castle of Illusion Starring Mickey Mouse is a 2.5D platform game developed by Sega Studios Australia and published by Sega. The game is a remake of the original 1990 Sega Genesis/Sega Mega Drive video game of the same name, which was the first title in the Illusion series of Mickey Mouse video games. The game was released on PlayStation 3 on September 3, 2013, and on Xbox 360 and Microsoft Windows the following day. It was released for Mac OS X by Feral Interactive on July 24, 2014.

The game was delisted from Steam, Xbox Live, and PlayStation Network on September 2, 2016, the same week that the Xbox 360 version of the game was made backward compatible on Xbox One. Sega said that those that have purchased the game will be able to redownload it without issue. The game was relisted for those platforms on March 31, 2017. The iOS and Android versions were not affected, as they are published by Disney Interactive Studios.

Following the same style of gameplay as the original Mega Drive/Genesis title. Presented in high-definition 3D graphics, the game is largely played as a side-scrolling platformer like its predecessor, although some sections allow Mickey Mouse to move in multiple directions, such as puzzle segments. Mickey's main offensive ability is his bounce attack, which he can use to bounce on enemies and reach higher areas. He can also collect projectiles which he can throw at long distance enemies. Levels are re-envisioned versions of

the original game's levels now separated into three acts, featuring new layouts, puzzles and enemies, as well as enhanced boss fights. The castle itself, which was merely a transition in the original game, can now be fully explored, with new areas opened up by collecting numerous gems littered around each level. Throughout the game, players can find playing cards and chilli peppers that can be used to unlock various outfits for Mickey.

The Castle of Illusion remake was teased by Sega in April 201 and was announced later that month. The game was developed by Sega Studios Australia, their last game before the studio was shut down, under the supervision of the original game's director, Emiko Yamamoto. The game features a remastered soundtrack arranged by Grant Kirkhope, as well as an option to listen to the original 16-bit soundtrack composed by Shigenori Kamiya. The game also features full voice acting for Mickey, as well as narration by Richard McGonagle.