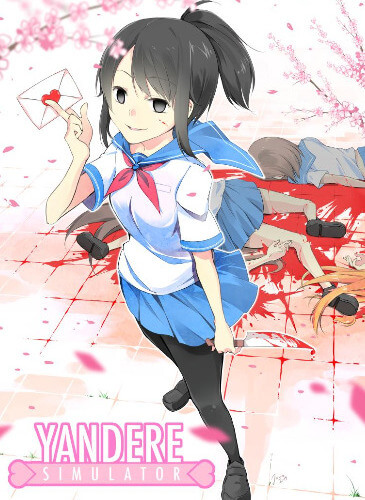 Yandere Simulator is an upcoming stealth action psychological horror video game currently in development by Alex Mahan, known more commonly by his username, YandereDev. The game centers upon an obsessively lovesick schoolgirl named Ayano Aishi, also known as "Yandere-chan" after the Japanese term "yandere", who has taken it upon herself to eliminate anyone she believes is monopolizing her crush's attention. Over the course of ten weeks, Ayano will eliminate ten different rivals in order to ensure that her crush, Senpai, will not fall for the other girls.

Players control Ayano Aishi (nicknamed Yandere-chan), an apathetic Japanese high school girl who has developed a crush on her fellow student Taro Yamada. Ayano Aishi is a character who had no true feelings until she met Taro Yamada. She felt love. An emotion. This caused her to be even more head over heels her crush and was very over protective of him (making her a yandere). Taro Yamada,  nicknamed "Senpai".  Over the course of ten in-game weeks, ten other students will attempt to form a relationship with Senpai, and Ayano must prevent them from doing so.

Due to her yandere nature, this can be accomplished by the player through a diverse array of methods ranging from peaceful to violent, including matchmaking, befriending, betrayal, gossip, expulsion, frameup, kidnapping, electrocution, crushing, poisoning, drowning, burning, homicide, faked suicide, incited suicide, murder–suicide after torture, and other rival-specific elimination methods, as well as simple elimination methods using various weapons seen throughout the game, such as a kitchen knife, circularsaw, a baseball bat, and katana. Throughout the game, Ayano can receive aid from an information broker calling herself "Info-chan", who provides her with weapons, plans, items, and other favors in exchange for panty shots, information and blackmail material.

Ayano must also avoid being witnessed while performing criminal activities or suffer penalties, such as loss in reputation that makes it harder for other students to trust her, diminishing sanity that discourages Senpai and hinders ability to carefully carry out crime, to an immediate game over by being caught by Senpai for acting suspiciously around him, being caught in the act of a crime by him, or being apprehended by students or a teacher. Murdering students can result in penalties to "School Atmosphere", which alters NPC behavior to become more suspicious and riddled with anxiety, demonstrated by actions such as locking their lockers. During this time, she can join school clubs and attend classes to receive additional abilities such as easy access to weapons, increased abilities to avoid suspicion, or easy access to other items.

YandereDev is the username of Alex, an independent game developer in California who worked at a video game company for three years,where? then left to pursue a career as an independent game developer and freelance programmer. In April 2014, YandereDev pitched the idea for Yandere Simulator on 4chan, where it got a lot of positive feedback, so he decided to start developing it. It is a social stealth game that borrows elements from the Hitman series of video games, but also contains "school simulation" gameplay and other elements that seek to make it quite different. The developer has also cited influence from the Persona series of games, in addition to Hitman.

Development for Yandere Simulator began in 2014, with YandereDev releasing test builds of the game for debugging purposes. He has regularly released updates that add elements to the game, such as the ability to poison, electrocute, and drown rivals, befriend other schoolgirls, small mini games, a town the player can bike around in, and more.

On March 1, 2017, YandereDev announced a partnership with tinyBuild that would help him with polishing and promoting the game. Through mutual agreement, the partnership was broken up again in December that year. Later, drama exposés came up around March 2018.