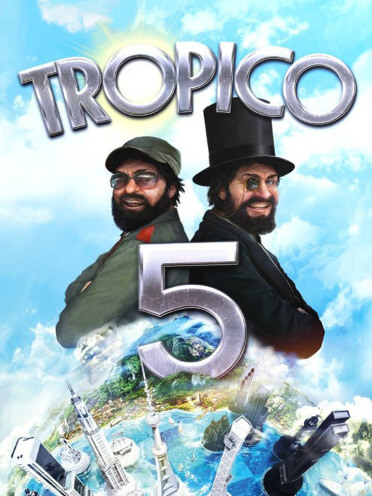 Tropico 5 is a construction and management simulation video game developed by Haemimont Games. It was released for Microsoft Windows in May 2014, with versions for Linux, OS X and Xbox 360 released later in 2014 as well as versions for PlayStation 4 and Xbox One released in April 2015 and May 2016 respectively.

For the first time in the Tropico series the game features cooperative and competitive multiplayer for up to four players. The players are able to build cities on the same island, allowing the choice of working with one another, or against.

There are a number of additions to the Tropico 5 game mechanics from the previous iteration of the series, notably the ability to advance to a new era if certain requirements are met; such as having written the constitution of Tropico. Tropico 5 includes 4 different eras, starting from Colonial Era, World Wars, Cold Wars and progressing up to Modern Times which allows progress from the 19th to the 21st century. Another gameplay mechanic is 'El Presidente' now has a dynastic family which will be present on the island. The trading, research, renovation and exploration features have also been overhauled. With multiplayer, diplomacy allows the players to share resources, construction workers, and electricity. Additionally, they are able to help each other with cash. Finally, players are able to compete and even declare war on each other.

According to series producer Bisser Dyankov, Tropico 5 is designed to be much denser than its predecessors. The citizens are the lifeblood of the island to grow the island empire and for the sustainable growth, the players need to make them happy. Due to the needs of the 10 different in-game factions, one man's happiness may be another man's frustration. And their allegiances may change depending on the sort of government you run or the buildings you build. Due to the constitutional changes, some of the faction happiness may drop or rise depending on their allegiance to their factions.

Tropico 5, in the base game, comes with 15 missions, split into two parts. In both parts, you advance through all of the four eras, completing various objectives with one final objective for each mission.

In the first part of the game, Tropico must declare independence from the Crown, a spin on the British Empire. The player is also introduced to the campaign's primary antagonist, Leon Kane, the leader of The Order. Once the island has gained its independence (and thus ending the Colonial Era), the player, represented by "El Presidente" and his dynasty, must win three bets against the US President to befriend him; at the same time, a real estate tax must be paid continuously to the Crown. In the next mission, the island must build and maintain a large army in order to fend off a pending invasion. Once the invasion is defeated, the player must accrue a large sum in their Swiss Bank Account in order to purchase Switzerland and get "Dr. Zweistein" onto the island. This leads onto a demonstration of the tourism mechanic, in which the player is tasked with paying fees to The Order while, at the same time, trying to get enough tourists onto the island. Once that is accomplished, the player must build a Nuclear Program building to avoid World War III. Then, the island must produce and export Uranium for The Order, while at the same time, stopping the protests and increasing strikes from destroying the economy. At the end of this mission, Kane's plan is revealed: he wants to use the uranium to build enough nuclear missiles and launch an attack on the entire world, killing most of the population. The player must then generate enough research points to build a time machine (thanks to Zweistein from earlier) and travel back in time, thus beginning part two and averting the nuclear war.

In the second part, Tropico must produce and export gold to the Pirate King in order to free the King's son, for the Crown, all while dealing with constant pirate attacks. The next mission has the player exporting food to the King. After this, the island must amass a fortune high enough to become the richest country in the Caribbean. Once this has been done, the second military-themed mission has the player building a large army, not to defend, but to invade the island of Cayo de Fortuna. The location of Kane is discovered, before he has the opportunity to start a nuclear war, and the player must complete a variety of tasks that help to assassinate him. After this has been completed, Tropico must export resources in order to dissolve the USSR, and then bring all the modern superpowers together and dealing with constant military threats to end the campaign.

In the game's sandbox mode, the player has a choice between choosing a pre-generated island provided by the developers or from the Steam Workshop, or they may generate a new, random island with a variety of options. Once their island has been created, they work through all the ages, receiving small and large tasks alike to help them advance through the ages and build a stable island. Each of the eras are endless, and may be progressed to whenever the player would like, by completing each of the three main tasks that are given at the end of the first three eras.

As leader, players can decide their country's independence and write a full constitution.