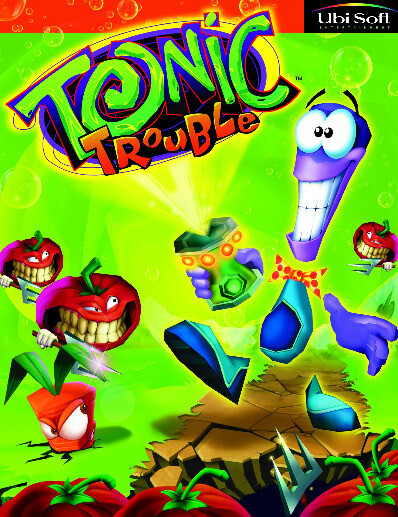 Tonic Trouble is a 1999 action-adventure game developed by Ubi Soft Montreal and published by Ubi Soft. The game follows janitor Ed, who drops a container of unidentified fluid from his spaceship to Earth, transforming the planet into a mutated version of itself. Drunkard Grögh drinks from the container and is granted powers that lead him to conquer Earth. Assuming the role of Ed, the player is tasked with solving puzzles and defeating enemies to acquire the tools to conquer Grögh and repossess the container with the aim of creating an antidote.

Tonic Trouble was conceptualized by Michel Ancel and developed by a team of around 120 people, starting pre-production in June 1996. After multiple delays, the game was released for Nintendo 64 in August 1999, with a Microsoft Windows version following that December. A Game Boy Color adaptation was made by RFX Interactive and released in Europe in 2000. Tonic Trouble received a mixed response from critics, who approved of the controls, score, level design, and graphics, but criticized the camera system, gameplay, visuals, and its derivative nature. The game sold 1.1 million copies.

Tonic Trouble is an action-adventure game played from a third-person view. The playable character, Ed, navigates three-dimensional environments through platforming and entering portals, while wielding a peashooter (used in a first-person perspective); new gadgets are rewarded as more levels are completed. Gadgets are created by a "mad doctor" character, who builds the peashooter, a bow tie that enables Ed to fly, a diving helmet for underwater exploration, a belt that functions as a cloaking device by letting him take the appearance of enemies, and a pogo stick that allows him to traverse lava and stomp open trap doors. There are six levels on the Game Boy Color version, contrary to the twelve featured in the Nintendo 64 and Microsoft Windows versions.

Ed can jump, climb, fly, swim, and crawl. To unlock the ability to kick and slap enemies, he must enlarge himself into Super Ed with popcorn consumables. The health bar increases from obtaining golden thermometers. Ed can use a stick to beat enemies, activate switches, and pry open doorways to areas containing bonus items. Fetch quests include collecting red orbs and other items; solving puzzles can grant power-ups and help defeat enemies. Collecting bonus spheres will unlock a secret level.

Ed, a purple alien working as a janitor on his mothership, finds himself cleaning a storage room. He starts hunting a bug, trying to squash it. Exhausted from the hunt, Ed proceeds to drink an unidentified liquid from a container, but as he spits it out onto the floor, screws come alive and open a trapdoor. The container falls through the door and down to Earth, polluting a river and causing the entire planet to mutate. Grögh, a drunkard sleeping nearby, swallows the liquid and gains supernatural powers that help him conquer Earth.

Shortly following the incident, Ed is recruited by resistance leader Agent Xyz to obtain the container so that an antidote can be created against the mutations. Ed takes a small spaceship to Earth to meet the inventor Doc and his daughter Suzy, who Xyz said would give aid in his mission. On his way there, he crashes into a snowy mountain, causing him to continue by sled. At the foot of the mountain, Ed takes the direct way to South Plain, where he encounters Suzy. She implores Ed to save her father, who was imprisoned by his own robot following the contamination.

Once liberated, the Doc informs Ed that before his capture, he was building a catapult that could get someone into Grögh's Castle and recover the container. However, Grögh's henchmen took the items required to finish the contraption, which the Doc instructs Ed to retrieve. The last item is stolen by an enemy called Magic Mushroom, but Ed defeats him. With the Doc's catapult completed, Ed is flung into Grögh's Castle, where he engages in battle against Grögh and wins. Ed reclaims the container, enabling him to finally remedy the infestation of Earth.

Tonic Trouble was met with mixed reception upon release, according to review aggregator GameRankings. It sold 1.1 million copies as of 2001. Electronic Gaming Monthly thought that, in terms of level design, Tonic Trouble was "a tightly developed platformer"; the control scheme was similarly praised. Game Informer wrote that the "wide variety" of gameplay and "solid" controls would be enjoyable to platformer fans. GamePro commended the musical score and sound effects, noting the puzzles as what kept the gameplay "diverse" and "challenging". Suzi Sez, reviewing the PC version for GameZone, enjoyed Tonic Trouble's "stunning" 3D graphics, "great" sound effects and music, "cute and fun" storyline, and unrelenting replay value. IGN's Matt Casamassina considered the visuals to be "good", the characters and levels to be "well designed", and the music to be one of the game's strong points. IGN's Game Boy Color review of Tonic Trouble, written by Tim Jones, described the controls as "tight and responsive" and the humor and visuals as "enjoyable". Jones thought the graphics, seen as "clear" and colourful, complemented the level design, adding that the sprites boasted "excellent" and detailed animation. He felt the music was also well made. Jeffrey Adam Young of Next Generation approved of the game world and its blend of platforming, exploration, and puzzle-solving elements. In agreement with Jones, Young lauded the "responsive" controls as well as the humor. Nintendo Power appreciated that the controls made the characters and world more enjoyable. The music was said to offer a sufficient match for the graphics.