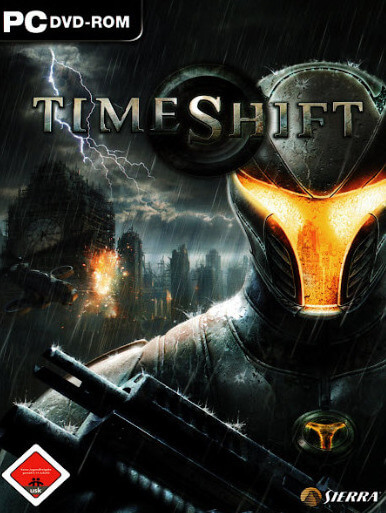 TimeShift is a first-person shooter developed by Saber Interactive and published by Vivendi Games for Microsoft Windows, Xbox 360, and PlayStation 3. It was developed using the Saber3D Engine. The game was released on Xbox 360 and Windows on October 30, 2007 in North America; November 1, 2007 in Australia; and November 2, 2007 in Europe.

Scientists from the near future have begun work on creating a viable time machine. The project results in the creation of two devices, the Alpha Suit, a prototype jump suit, and the Beta Suit, a more advanced, military grade model with features the Alpha Suit lacks such as combat-related timeshifting abilities and an integrated artificial intelligence to prevent the creation of temporal paradoxes.

The director of the project, Dr. Aiden Krone, takes the Alpha Suit and travels into the past. Once there he alters the timeline, placing himself as the ruler of the Krone Magistrate that controls a dystopic world.

The protagonist, an unnamed fellow scientist (originally intended to be called Michael Swift), takes the Beta Suit and follows Dr. Krone back to the year 1939 in an alternate timestream to a place called Alpha District. During the transport, parts of the Beta suit are damaged (an "auto-return" which allows for a "checkpoint" system, and the ability to revert to the original timeline) forcing the protagonist to assist the Occupant Rebellion against Dr. Krone in hopes of salvaging parts from the Alpha suit.

He is confronted by Krone in a giant war-machine which nearly destroys the Occupant Rebellion, but he succeeds in defeating Krone. As an incapacitated Krone emerges from the wreckage, the protagonist kills him and retrieves the part required to repair the Beta suit. He is thanked by the Occupant commander and returns to the original timeline to save his girlfriend who had been killed by the explosion Krone had caused. He shuts down the bomb and walks up to his girlfriend, who begins to wake up. She reaches out to him although not sure of who he is. As he begins to remove his mask the computer in the suit warns that a paradox is imminent and transports him away.

The key feature of TimeShift is the player's ability to control time: slowing, stopping or even rewinding time more or less at will. This allows a player to stop time to dodge an incoming projectile or steal an enemy's weapon. Specific time-related puzzles also require these abilities. The player's abilities also affect the color of their environment in such that slowing time produces a blueshift, rewinding it produces a yellow haze, and stopping time creates a white filter "haze". The player must use them wisely to make its way through the game. In some parts of the game the time powers are lengthened.

The game was originally going to be published by Atari, but publishing rights switched to Sierra on April 20, 2006. On August 31, 2006, TimeShift was delayed for a second time.

Because the game had been delayed several times and was not mentioned very much in gaming news, the press thought that the project had been abandoned - later attributed to a highly negative reception of the 2006 demos. However, on April 10, 2007, Vivendi Games announced that they were giving TimeShift a complete overhaul and were fixing many bugs.

One of a number of changes is that Michael Swift, the game's original protagonist, will not be appearing in the game. After the retooling of the game, Saber introduced "the suit" as the time control device, making the protagonist anonymous. Saber said that this change was to let the player imagine that "you are the protagonist".

Initially, TimeShift was announced for Windows and Xbox 360, but at the 2007 SCEA Gamer's Day, it was announced that the game would also be appearing on the PlayStation 3. All iterations of the revamped game came out on time or early, on all platforms, world-wide in holiday 2007.

TimeShift has received mixed to positive reviews. The PC version received 71/100 on Metacritic and 72.20% on GameRankings.