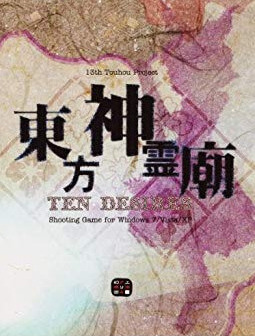 Touhou Shinreibyou ~ Ten Desires (東方神霊廟 ～ Ten Desires, lit. "Eastern Divine Spirit Temple") is the thirteenth main game of the Touhou Project scrolling shooter series made by the dōjin game maker Team Shanghai Alice. Due to the 2011 Tōhoku earthquake, the initial release of the demo was delayed. Instead, the demo was released for free download on April 16, 2011 with the physical copy being released on May 8, 2011 at Reitaisai 8, with all proceeds going to charity for disaster relief. The full version of the game was released in the 80th Comiket in August 13, 2011. The game was also released on Steam on June 18, 2019.

The new game mechanics for Ten Desires features divine spirits. These divine spirits are released when enemies are killed, bosses are damaged, and at certain scripted events. The blue spirits add 10 to the player's "score value" (the number of points granted for collecting a point item at the top of the screen), in addition to slightly filling the player's trance gauge (see below). Gray spirits provide a larger increase to the trance gauge and act like additional Point items, giving you the current maximum Point value no matter where they are on the screen. Green spirits add 1 point to the bomb meter, and purple add 1 point to the life meter. Extra lives are awarded at 10 life points for the first life, 15 for the second, 20 for the third, and so on. Bombs are awarded at 10 bomb points regardless of how many are acquired.

Grazing adds to score value as well; every 10 bullets grazed increases score value by 10. Additionally, bosses can be "grazed" as they emit blue (and gray) spirits every few shots, and if one stays close enough to the boss they can absorb all the spirits that it emits. The rate at which spirits spawn is negatively correlated with the distance from the boss; The closer the character is, the faster spirits will spawn. This makes sitting on top of bosses while in trance a highly profitable score return.

At the end of every spell card (with the exception of the last spell card of a boss) the boss emits 1 green spirit, and 1 purple spirit (along with blues and grays).

The Trance gauge consists of zero to three flames that are built up by collecting blue and gray divine spirits. The player begins the game with one flame, and can collect up to a max stock of three. Pressing the 'C' button when all 3 gauges are full will trigger a powerful, 10 second long trance state, where the character gets an upgraded shot type and is not damaged by enemy bullets. While in a trance state, the divine spirits take on a new shape that not only makes them much easier to see, it also makes them worth more. Blue spirits get x10 effectiveness, while purple and green get x2 effectiveness. If a character is struck by an enemy bullet while there is at least one full trance gauge remaining, the trance-state will automatically trigger, with the loss of a life once the timer runs down. The duration of the death trance depends on the amount of gauge collected to that point. In addition, when a trance (whether activated manually or upon receiving damage) expires, the player's trance gauge is reset to 0.

Shooting unfocused yields a higher score rate than shooting while focused. Divine spirits hover in roughly the same place while shrinking in size for approximately ten seconds before disappearing. In addition, they cannot be auto-collected (except by Reimu in Trance Mode). When a "death-trance" is finishing it still deals damage to everything on the screen similar to the way when a character would die normally. It is not possible to deathbomb while at least one gauge of the trance meter is full (that is, when death-trance is possible).

One day in Gensokyo, a large amount of spirits are being found throughout the city. Reimu, Marisa, Sanae, and Youmu intend to see what is going on. Depending on who you choose, one of them goes out and investigates.

The first place the heroine heads of to is the Netherworld, where spirits often go. While investigating, the heroine encounters Yuyuko Saigyouji. Yuyuko states that she has no idea what the spirits are going around for. The heroine battles with Yuyuko, and Yuyuko is defeated. Yuyuko states that they are no ordinary spirits; they are 'divine spirits'. Yuyuko gives the heroine a hint: the graveyard behind the Myouren Temple. The heroine proceeds to the temple. While looking around, the heroine confronts Kyouko Kasodani, the temple's cleaner. Kyouko is easily defeated, and the heroine goes to the graveyard of the temple. Not too long after, the heroine meets Kogasa Tatara, who asks the heroine to defeat a girl who's guarding the place. Instead, the heroine attacks Kogasa and continues on. Eventually, they meet Yoshika Miyako, the Jiang Shi protecting the mausoleum. Yoshika is ultimately defeated and opens the door to the mausoleum.