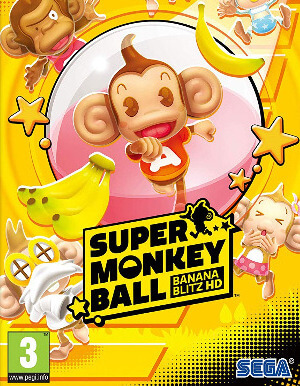 Banana Blitz introduces a new pirate-like villain named Captain Crabuchin, previously confused to be Dr. Bad-Boon. He has stolen the Golden Banana Bunch and AiAi and his friends must recover the scattered pieces of it.

The game spans a total of 100 main game levels, and 50 mini-games that each use the controller in a different way (e.g. "Monkey Darts" has players simulate the action of throwing a dart using the Wii Remote) as well as the appearance of all major characters featured in past games.

Unlike previous games in the Super Monkey Ball series, this game features eight boss battles, a feature new to the franchise.

The Wii controller is held parallel to the ground, with the monkey character rolling based on the slope of the game world, directly corresponding with the relative tilt of the Wii controller. The analog stick on the nunchuck attachment can control the camera but is entirely optional.

For the first (and only) time in a Super Monkey Ball game, players are able to jump by quickly flicking controller up while holding B, or by simply pressing the A button. The game also features character-specific abilities and stats for the puzzle stages, previously unseen in any other game in the series.

There are 50 mini-games in total in Banana Blitz. There is also a "party" mode whereby players can choose tournament-type gameplay, selecting mini-games in an attempt to accumulate the most points. Recurring mini-games from previous titles include Monkey Target, Monkey Race, Monkey Bowling and Monkey Wars.

The game received mixed-to-positive reviews from critics. EGM awarded the game a 6.2, stating that the new Wii Remote-based control scheme made the game excessively difficult but enjoyed the large number of games even if a few were not fun, whereas IGN said the controls simply had a relatively steep learning curve, and once the player is used to them, are superior to control using an analog stick. GameSpot also praised the controls but criticized the single player game for its brevity. All three found the new cel-shaded visuals a little simplistic, although noting that it was well-suited to the tone of the game. GameSpot also stated that Banana Blitz was one of the "best in the series". Hyper's Kosta Andreadis commends the game for its "standout party games, great use of Wii-mote for main game and its multiplayer mode". However, he criticized its boss battles, stating that they "can get tedious and certain party games are atrocious".