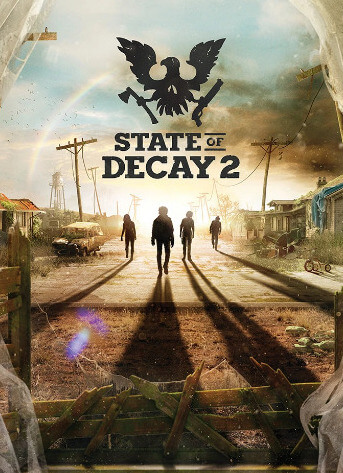 State of Decay 2 is an open world and "indie" zombie survival video game developed by Undead Labs and published by Microsoft Studios. It is a sequel to the 2013 video game State of Decay. The game was released on May 22, 2018 for Windows and Xbox One. The point of the game is to build a community, manage resources and survive against the horde of zombies.

State of Decay 2 is a zombie survival game, with an emphasis on scavenging for items, in which gameplay is experienced from a third-person view. The game is set in an open world environment and features cooperative gameplay with up to three other players.

State of Decay 2 is developed by Undead Labs and published by Microsoft Studios. The game is being developed using Unreal Engine 4. The game was announced on June 13, 2016, at Microsoft's E3 Xbox briefing. The game was scheduled to be released in 2017 for Windows 10 and the Xbox One video game console. At Microsoft's E3 2017 Xbox briefing, it was announced that the game would release in Spring 2018. Additionally, the game will also be available to play at no cost to Xbox Game Pass subscribers at the game's release, as with all forthcoming Microsoft Studios titles. State of Decay will also be sold as an Xbox Play-Anywhere title, as well as cross-play support between Windows 10 and Xbox players.

On September 12, 2018 the Daybreak DLC pack was released. This DLC added a new game mode in which the objective is to protect an objective whilst facing waves of increasingly difficult enemies. Rewards earned within the Daybreak game mode can be used within the standard game mode allowing access to exclusive gear and characters.

On June 11, 2019, a new expansion pack for the game, Heartland, was released, featuring new missions, characters and new enemy types. The expansion is set in Trumbull Valley, the setting of the first game.

Alessandro Barbosa of GameSpot gave State of Decay 2 a 5/10, enjoying the satisfying combat but taking issue with the lack of depth in its survival systems and the amount of bugs; he felt that "State of Decay 2 sometimes feels like a far-too-real representation of the mundane reality that comes with surviving a zombie apocalypse." Dan Stapleton of IGN also disliked the game's bugs and lack of depth, particularly with the board-game-style management. However, he praised the combat, calling it "simple but satisfying", and the variety of zombies and the persistent fear of permanent death; he awarded it a 7.5/10.

On May 25, 2018, Microsoft announced over 1 million players had played the game since its release, and on June 4, 2018 that mark had exceeded 2 million players. In June 2018, it was announced that State of Decay 2 exceeded 3 million players, and by August 2019 it surpassed 10 million.