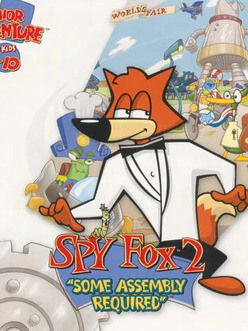 Spy Fox 2: "Some Assembly Required" is the second of three games in the Spy Fox series of video games developed and published by Humongous Entertainment and marketed by GT Interactive Software. The game is an adventure game centered on the World's Fair.

The freedom of the world is once again in peril as the Spy Corps must call on their trusty envoy, Spy Fox to neutralize a plot engineered by the Society of Meaningless Evil, Larceny, Lying and Yelling (S.M.E.L.L.Y.)

The Giant Evil Dogbot, a villainous weapon, is masquerading as a statue at the World's Fair. The Dogbot's collar cleverly holds the Chateau LeRoach, a revolving restaurant where SpyFox will find Napoleon LeRoach, mastermind of a plan for revenge, dining. LeRoach has held a grudge against the population of his world for a long time, ever since he was denied entry to the World's Fair because of his insufficient height.

With the entry of each fairgoer, the turnstile winds-up the Giant Evil Dogbot's gears. Then, before the millionth customer moves through the turnstile, Spy Fox slips through the Achilles’ heel of the evil Dogbot by sneaking past the breath analyzer to install the OFF switch and set the activation code. If possible (to get the bonus ending) Spy Fox tricks LeRoach into entering prison through its sewer pipes.

The Electric Playground named Spy Fox 2 the best computer adventure game of 1999. The editors wrote, "We're still furious that the only truly great adventure game this year was made for kids."

A Kiss for the Petals
hit
upd
new