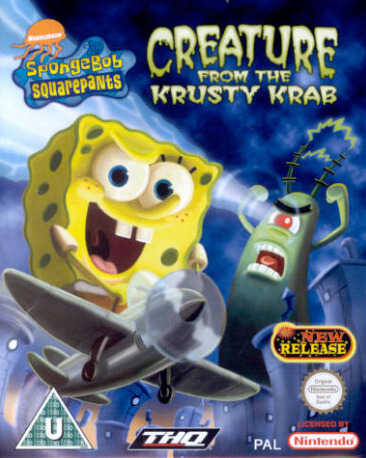 SpongeBob SquarePants: Creature from the Krusty Krab is a platform video game released for Microsoft Windows, Nintendo GameCube, PlayStation 2 (PS2), Game Boy Advance (GBA), Nintendo DS, and Wii by THQ. The PS2, GameCube, and Wii versions are all ports of the same game developed by Blitz Games, while the Game Boy Advance, Nintendo DS, and PC versions were separate games developed by WayForward Technologies and AWE Games respectively. It is based on the Nickelodeon animated sitcom SpongeBob SquarePants, and stars the title character, his best friend Patrick Star, and their enemy Plankton as they journey to nine different worlds, supposedly, inside the dreams of the characters. The Wii version was a North American launch title. It is also the first SpongeBob game released in Japan (PlayStation 2 and Wii versions), but was released under the title SpongeBob (スポンジ・ボブ Suponjibobu), to mark it as the first video game in the SpongeBob series to have a Japanese release. The Windows version of the game is titled SpongeBob SquarePants: Nighty Nightmare.

Players have access to three playable characters during the game, SpongeBob SquarePants, Patrick Starfishman (Patrick Star in superhero form), and Sheldon J. Plankton, and must guide them through nine levels of play in a dreamworld. Four different types of gameplay have been incorporated into the game, known as flying, rampaging, racing, and platforming. During flying sections, the game sets obstacles, one in front of another, and the player must maneuver past them. In most cases, the game will tell the player which way to fly (up, down, left, and right). On the Wii, the player uses the controller like an actual plane control stick. The most common cases of this is when SpongeBob uses his plane to attack a giant-sized Plankton. In rampage levels, the player controls a giant sized Plankton and uses special powers and moves to destroy everything in their path. The player's laser power is indicated by a bar on the right side of the screen, which refills after use. The Wii version features controller movements that respectively activate moves. Racing gameplay is similar to most racing games; it is featured in both the air and the ground's gameplay, fuel must be collected in order to keep the player's vehicle running. The platforming gameplay is spread throughout the game, such as when Plankton must escape from a live Krabby Patty or when Patrick Starfishman saves Bikini Bottom from his evil form, Dreaded Patrick.

In a dream, SpongeBob's bed transforms into a hot rod and he drives it around a track across Bikini Bottom, which now resembles an art style inspired by the works of Ed Roth. After upgrading his car and several races against Patrick, Plankton and Gary, he accidentally drives into an unnoticed pit.

In another dream, Patrick is a superhero named "Starfishman" in a cel-shaded comic book-like world where everyone resembles him. Starfishman pursues the villainous "Dreaded Patrick", who attempts to remake the town in his own image. Starfishman goes around town beating his minions, getting clothes for a man after saving him from a train, and giving the mayor laundry detergent to help "clean up the town." Starfishman eventually beats Dreaded Patrick in a battle at his secret lair. However, Starfishman fails to see a surprise attack. He is tied to a rocket originally intended for another starfish and launched into outer space, where he hits an asteroid, a piece of which falls to Earth and traps Dreaded Patrick.

In yet another dream, Plankton zaps a crumb of a Krabby Patty with his Enlargatron Ray. However, the ray's coordinates are inaccurate, causing the Krabby Patty to overgrow and mutate into a vicious living patty. Plankton decides to fight back with size but the inaccurate ray only makes him the height of an average citizen, not enough to dwarf the patty. Plankton, carrying only his freeze ray, is pursued by the patty throughout Bikini Bottom. The patty ultimately loses Plankton when he hides. However, Plankton gloats about his victory and is spotted. The patty leaps forward and crushes Plankton.

Returning to SpongeBob awakening, he reaches the bottom of the pit he drove into and is eaten by an Alaskan Bull Worm. He encounters Old Man Jenkins, who is building a biplane to escape the bowels of the worm. Within the worm, SpongeBob locates spare parts from the chief of a village inside and an inventor for the biplane, he also gets rid of a huge can of chili that's causing the worm stomach problems.

In outer space, an awakening Starfishman manages to untie himself from the rocket after flying around. He shoots asteroids guarding a space station and continues to fly around until he meets up with a U.F.O. in the shape of a patty. He shoots off its wings, destroying it. Then Patrick returns to Earth while trying figure out how to stop the rocket.

Plankton awakes to find the giant Krabby Patty sleeping beside him. As he sneaks away, Karen's wake-up call awakens the patty. Plankton sets the accurate coordinates for his ray and makes himself giant monster-sized. The patty flees and Plankton gives chase, destroying Bikini Bottom in his wake. He finds the patty hiding in a skyscraper twice and destroys each floor to force it out. Meanwhile, SpongeBob and Jenkins forcibly exit the worm's mouth and find Plankton. The giant patty escapes Plankton's clutches and clings onto SpongeBob's plane. Enraged, Plankton pursues the plane.

SpongeBob tries to avoid Plankton while devising a plan to defeat him. After a long pursuit through the city, including the sewers and a construction site, SpongeBob engages Plankton on a radio tower. SpongeBob destroys the support bolts to make the tower unstable, causing Plankton to fall on his rear. As Plankton aches in pain, SpongeBob feels sorry for him and decides to help him up. Plankton then captures SpongeBob.

Starfishman awakens again arrives from outer space, he teams up with Mermaid Man and the Bikini Bottom Defense Force Army to battle giant Plankton and rescue SpongeBob. Several other plankton arrive on the rooftops to get rid of him. After four battles, Starfishman must locate a shrink ray to shrink Plankton.

The game was nominated for an Annie Award for best animated video game in 2006. It also won the award for favorite video game at the 2007 Kids' Choice Awards. The game received mixed to average reviews in addition to some more positive or negative ratings. Nintendo Power referred to the game as the "most ambitious and most successful SpongeBob game to date" in their December 2006 issue. Some positive aspects noted by reviewers about it included the variety in gameplay, responsive controls on the GC and PS2 versions, straightforward and solid level design, and the game's overall ambition, while negatives points included subpar graphics, especially on the GC version, overly long and poorly paced platforming and racing levels, and the occasionally unresponsive motion controls on the Wii version.

Several reviewers also noted that the fictional world does not resemble Bikini Bottom or the cartoon itself, that the story and overall tone is slightly darker and more surreal compared to previous games, and that the game does not "feel" like a SpongeBob SquarePants title.