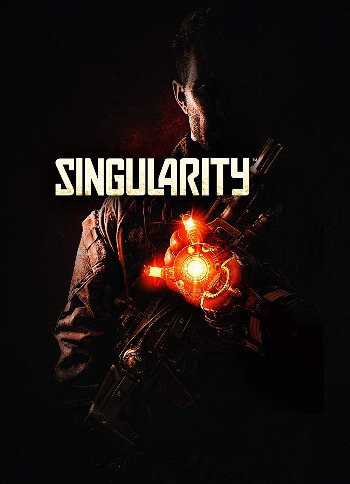 Singularity is a 2010 first-person shooter video game developed by Raven Software and published by Activision and released for Microsoft Windows, PlayStation 3 and Xbox 360. Singularity is Raven Software's third title built on Epic Games' Unreal Engine 3. This was the last original IP the company had worked on before exclusively working on the Call of Duty series.

The game begins when an electromagnetic surge from an uninhabited island called Katorga-12, once held by the Soviet Union, damages an American spy satellite. A group of U.S. Recon Marines, which includes the protagonist, Captain Nathaniel Renko, goes to investigate. Another surge disables the unit's helicopter, and it crashlands on Katorga-12. Following the crash, Renko begins to phase between the present and 1955, the date of a catastrophic accident on the island. He arrives in 1955 just in time to save a scientist named Nikolai Demichev (Steve Blum) from dying in a fire. As he rescues Demichev, a man tries to warn Renko not to save him; the man is then killed in the fire.

Back in the present, Renko discovers that Demichev has taken over the world. He is captured by Demichev's soldiers, but is rescued by Kathryn (Kari Wahlgren), a member of a resistance group called Mir-12. Based on a journal the group found on Katorga-12, Mir-12 believes that Renko can put an end to Demichev's reign using the Time Manipulation Device (TMD) developed by Victor Barisov (Graham McTavish). Barisov was killed by Demichev in the past, so Renko uses the TMD to save Barisov.

Back in the present, Renko and Barisov determine that they can set history right by returning to 1955 and destroying Katorga-12 with a bomb made from E-99, the material that caused the catastrophic accident in 1955. Renko and Kathryn manage to find such a bomb, but Kathryn is lost as they retrieve it. They use the bomb to destroy the island, and thus, the research facility that Demichev used to become so powerful.

Back in the present, Renko finds Demichev holding Barisov at gunpoint. Demichev reveals that he rebuilt the facility after it was destroyed, so that history remained unchanged. Barisov realizes that it was Demichev's rescue that changed history, so he asks Renko to go back and stop his past self from saving Demichev. Demichev, in turn offers Renko a place in his empire in exchange for the TMD. He also points out that Barisov's plan has failed before – the mysterious man who told Renko not to save Demichev in 1955 was Renko himself.

At this point, the player has a choice. If Renko shoots Demichev, he goes back in time to stop himself from saving Demichev in the first place. In order to do so, he decides to kill his past self. In the epilogue, the game starts again from the very beginning, and Renko is sitting inside the helicopter that is searching the area. However, the mission is soon aborted and declared to be a false alert. They fly past a giant statue of Barisov. It is implied that he recovered the TMD and used it to conquer the world himself. If Renko instead shoots Barisov, he and Demichev rule the world together. After some time, Demichev begins to fear Renko's growing power, and a new cold war develops between the lands ruled by Renko and those ruled by Demichev. If Renko shoots both Demichev and Barisov, Renko allows the world to fall into chaos. Later, he rises up as a new world leader, using the TMD to assert his power.

A post-credits scene then shows a wounded Kathryn, pulled into 1955 by a time distortion, writing the Mir-12 journal which will later be used to track down Renko.

Singularity is a first-person shooter with survival horror elements. A main gameplay device is an artifact known as the Time Manipulation Device (TMD). The TMD is powered by an E-99 core, and can manipulate time. The TMD can move an object backwards or forwards in time, attract something and hold it indefinitely, or send a pulse of energy that can stun or kill enemies. The TMD can only affect living beings or objects that have been in contact with E-99. Some living beings, like the Spetsnaz troops who are covered in heavy armor designed to repel E-99, are immune as well.

The TMD can be used in conjunction with special power stations scattered across the island that greatly amplify its power, allowing it to affect objects much larger than it can normally control such as collapsed bridges or shipwrecks.

There are two multiplayer modes. Both modes have the players fighting as either the soldiers or creatures, with each side having their own classes and abilities. One mode, simply called "Creatures vs. Soldiers", is a simple team deathmatch style game, while the other mode, called "Extermination", has the soldiers trying to take control of various beacons on the map, with the creatures tasked with defending said beacons to prevent eradication. Once the time runs out, or the soldiers capture all the beacons, the players switch roles.