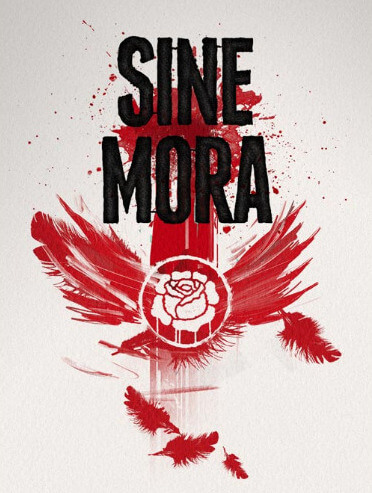 Sine Mora is a shoot 'em up video game developed by Digital Reality and Grasshopper Manufacture for the Xbox 360, Microsoft Windows, PlayStation 3, PlayStation Vita and iOS. It was released on March 21, 2012 for the Xbox 360 via Xbox Live Arcade, on November 20, 2012 for PlayStation 3 and PlayStation Vita via the PlayStation Network, on July 16, 2013 for iOS via iTunes Store, as well as Microsoft Windows, and on August 13, 2013 for the Ouya. The game is a 2.5D shooter; gameplay is restricted to two axes while the environment is rendered in 3D. The setting has been described as diesel punk inspired and features anthropomorphic characters.

On March 3, 2017, THQ Nordic unveiled Sine Mora EX, an extended version of Sine Mora for Microsoft Windows, PlayStation 4, Nintendo Switch and Xbox One. The game was a surprise announcement to debut in PAX East 2017. It was released on August 8, 2017 and the Switch version released on September 26, 2017 in North America and October 10, 2017 in Europe.

Sine Mora (Latin meaning, "without delay") is a side scrolling shoot 'em up game. The player controls an airplane along two axes while attacking enemies. The gameplay world is rendered in 3D, and at key points an in-game cutscene plays in which the camera and plane move. These are often transitions into another part of the gameplay world, but are also used to give the player a new perspective for things such as boss battles. The plane's primary weapons can be upgraded, and players are equipped with a limited-use, more powerful secondary weapon to eliminate more on-screen enemies at one time. Consecutive kills with the primary weapon will increase the game's score multiplier, while use of the secondary weapon or time manipulation will reset the multiplier. The player's final score is determined by a number of factors including kills, damage taken, and powerups collected.

As the game is marketed as a bullet hell shooter it features four difficulties: normal, challenging, hard and insane. The normal difficulty reduces the on-screen ordnance from enemies, while the insane difficulty is geared towards those who are veterans of the genre. In this difficulty the ordnance on the screen is much higher, forcing a greater difficulty level. In addition, four game modes are included: Story, Arcade, Score Attack, and Boss Training. Story mode is the primary mode of the game and allows the player to see the narrative as the game progresses. On the standard difficulty players are given eight continues, while the Insane difficulty yields only five. Completing levels on the more challenging difficulty unlocks an alternate narrative. Arcade mode removes the narrative cutscenes and limits the player to only three continues. Score Attack mode allows players to replay any stage previously completed with only one life. The objective is to achieve the highest score possible and complete the stage. Players do not progress to the next stage after completion in this mode. Boss Training allows players to practice and/or replay any unlocked boss battles. Continues in this mode are unlimited.

Sine Mora does not use a traditional player health mechanic. It instead plays on the aspect of time. Each level is given a set amount of time which continues to tick downwards. Taking damage will temporarily speed up this process, while eliminating enemies will add time back. Powerups in the game can provide bonuses such as shielding, extra time, and upgraded weapon. Players can choose from multiple characters and planes, and the combination of choices determines the vital statistics during play. Characters are not tied to a specific plane, rather characters and planes each have unique attributes, the combination of which determines the statistics.

Sine Mora features two plots running at different points in time. The first features a father bent on taking revenge on the Empire that executed his son for being the sole pilot that refused to drop a nuclear bomb during an attack on the Enkies. The second features the last survivors of the Enkie race also plotting revenge on the Empire for destroying them. The game stages are often set at the same locations, in noticeably different states due to being set in different eras.

The game takes place on the planet of Seol, which is much like Earth. It differs in that its crust is so unstable it often causes quakes that radically reshape its geography in a small amount of time. Albeit originally split into four great nations, by the time the plot unfolds two factions are locked in the Eternal War: the aggressive and dictatorial Layil Empire and the Atarach Kingdom of the Enkie race. Following the teachings of the great prophet Enki, the Enkie are renowned for their unique talent of manipulating time, to the point of being able to transport any item or even themselves to any point into the past or even the future. Over time, however, the Empire develops "The Project", a machine capable of manipulating time. The apparatus is capable of arbitrarily accelerating an item's or even living being's time flow to the point of literally erasing it from existence. Stored inside the floating fortress-city of Siriad, the Project uses every military vehicle of the Layil as a relay, creating a weapon that cannot be effectively disabled. This advantage has allowed the Empire to cut through Enkie defenses, culminating in a vicious (presumably) nuclear bombardment of the Atarach kingdom.

In the "normal" narrative, which encompasses the player's first playthrough, Ronotra Koss is mourning the death of his son, Argus Pytel, at the hands of his crewmates as he refused, during the flight of the bomber Cobalt King, to drop a nuclear bomb upon the Enkie capital city; embittered and vengeful, Koss mans a stolen Sine Mora school "Merenstein" plane and, with the help of a smuggled combat artificial intelligence, GARAI 74/22876, starts to systematically infiltrate Layil Empire structures and eliminate officers involved with his son's demise, all the while exacting a bloody revenge on the Empire which abandoned him after an incident left him an amputee. Finally reaching the city of Tira, capital of the Empire, he mercilessly destroys most of its military force, finally facing the colossal Domus assault fortress manned by the officer who killed Argus, managing to destroy it after maneuvering through its defenses and blowing up the power cores.

The parallel storyline involves Akyta Dryad and an ensemble of surviving Enkie resistance fighters unleashing a series of guerrilla attacks on the empire, bent on stopping the Project. Most of the locations are visited after Ronotra Koss' exploits, featuring a much more ruined look and stronger resistance by Empire forces. Resistance fighters fall one after another, either captured or killed in action, dealing a series of crippling blows to the Layil who, however, seemingly recover from each with minimal actual consequences save for structure damage. Infiltrating Siriad, the Empire's floating fortress-city, Akyta, then the sole survivor, reaches the main chamber housing the Project apparatus; there, she is horrified to find two million Enkie survivors connected to machinery, heavily drugged and genetically altered, their natural time manipulating capabilities being channeled to fuel the Empire's temporal gravitation weapons. Fighting the facility's guardian and controller, Ophan, she manages to end the threat of the weapon, leaving Layil unable to use time manipulation.