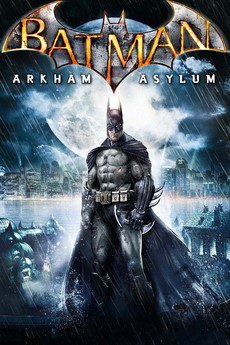 Batman: Arkham Asylum is a 2009 action-adventure video game developed by Rocksteady Studios and published by Eidos Interactive in conjunction with Warner Bros. Interactive Entertainment. Based on the DC Comics superhero Batman, and written by veteran Batman writer Paul Dini, Arkham Asylum is inspired by the long-running comic book mythos. In the game's main storyline, Batman's archenemy, the Joker, instigates an elaborate plot to seize control of Arkham Asylum and trap Batman inside with many of his incarcerated foes. With Joker threatening to detonate hidden bombs around fictional Gotham City, Batman is forced to fight his way through the asylum's inmates and put an end to the Joker's plans. Most of the game's leading characters are voiced by actors who have appeared in other media based on the DC Animated Universe; Kevin Conroy, Mark Hamill, and Arleen Sorkin reprised their roles as Batman, the Joker, and his sidekick Harley Quinn respectively.

The game is presented from the third-person perspective with a primary focus on Batman's combat and stealth abilities, detective skills, and gadgets that can be used in combat and exploration. Batman can freely move around the Arkham Asylum facility, interacting with characters and undertaking missions, and unlocking new areas by progressing through the main story or obtaining new equipment. The player is able to complete side missions away from the main story to unlock additional content and collectible items. Combat focuses on chaining attacks together against numerous foes while avoiding damage, while stealth allows Batman to conceal himself around an area, using gadgets and the environment to silently eliminate enemies.

Development began at Rocksteady Studios in May 2007, with a 40-person team that expanded to 60 people by the project's conclusion after approximately 21 months. Among others, the game design was inspired by Batman-penned works of Neal Adams and Frank Miller, and Grant Morrison's Arkham Asylum: A Serious House on Serious Earth graphic novel. Built on Unreal Engine 3, Arkham Asylum's production underwent several variations, refining both gameplay such as the combat system, and the central story, resulting in the removal of plot elements and some of Batman's main enemies, who did not fit the tone of the rest of the game. Rocksteady began developing ideas for a sequel months before Arkham Asylum's completion, hiding hints to the sequel within the game.

Arkham Asylum was released worldwide for the PlayStation 3 and Xbox 360 video game consoles on August 25, 2009, followed by a Microsoft Windows version on September 15. The game received critical acclaim—particularly for its narrative and combat. Reviewers called it the "greatest comic book game of all time," and the "best superhero game of modern times." It won several awards, including Best Action Adventure game, Best Game, and Game of the Year from different media outlets and held the Guinness World Record for "Most Critically Acclaimed Superhero Game Ever" and has been cited as one of the greatest video games of all time. The game received several re-releases, including a Game of the Year edition in March 2010, a Mac OS X version in November 2011, and a remastered version for PlayStation 4 and Xbox One in October 2016. Arkham Asylum's success launched the Batman: Arkham series, containing video game sequels and spin-offs, comic books, merchandise, and movies, beginning in October 2011 with its direct sequel Arkham City.

Batman: Arkham Asylum is an action-adventure game viewed from the third-person perspective. The playable character is visible on the screen and the camera can be freely rotated around him. The player controls Batman as he traverses Arkham Asylum, a secure facility for the criminally insane located off the coast of Gotham City. The opening areas of the game are linear, serving as a tutorial for the moves and approaches available to the player. Once the player emerges onto the island he can freely explore the game world, although some areas remain inaccessible until certain milestones in the main story. Batman can run, jump, climb, crouch, glThe player can use "Detective Vision"—a visual mode which provides contextual information, tinting the game world blue and highlighting interactive objects like destructible walls and removable grates, the number of enemies in an area and their status—such as their awareness of Batman's presence—and shows civilians and corpses. The mode is also used to follow footprints, investigate odors, and solve puzzles.