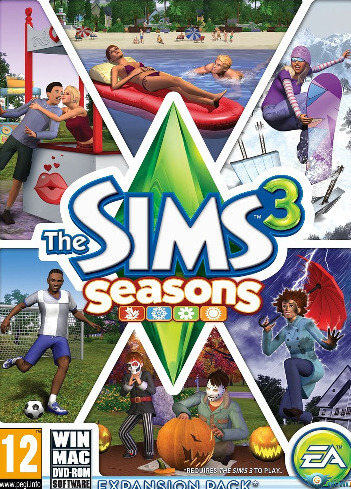 The Sims 3: Seasons is the eighth expansion pack for The Sims 3 on OS X and PC. It was released on November 13, 2012 in North America, and on November 16 in Europe.

Players can interact with weather, get into the mood of each season and tell meaningful stories with their sims. There are also unique festivals during each season, with events sims can take part in. Sims can get their faces painted and compete in a hot dog eating contest in the summer, carve a pumpkin and bob for apples during fall and have snowball fight or go snowboarding and ice skating in the winter. Sims can also swim in the ocean and play soccer all year round. There are new traits, "loves the cold" and "loves the heat". Sims with these traits will enjoy extreme temperatures, finding the cold or heat pleasant rather than uncomfortable. Sims can also catch a cold, get a tan, or get struck by lightning. Days are shorter in winter and longer in summer.

Aliens are also added in this expansion pack, similar to the ones from The Sims 2 but with some updates. They have brain powers allow them to control other Sims as servant and read other Sims traits. Aliens can also ride their UFO and abduct Sims or adventure through space.

There is a new feature that will allow players to change the appearance of lots throughout the year called "Seasonal Lot Marker". Players can set up different objects and decorations for every season, but cannot make build mode changes like walls or roofing. It is the key to the shifting seasonal festivals, but it also functions on community and residential lots.

Seasons adds new clothings like snowgear, swimwear, and raincoats. It adds filters in Create a Sim, which allow the player to find clothing from a certain expansion or stuff pack. Clothing from the base game, expansions, stuff packs, and the store will be updated to be selectable as outerwear.

Lots will transform with different objects and decorations throughout the year according to current seasons, holidays, and festivals. There is a festival held in each season. Festival lots usually replace the main park, but the lots that are being replaced are stored in the community lot bin in Edit Town mode so players can swap them out at any time should they choose to. Players have full control over the appearance of the festival lots, or they can build their own lots that change throughout the year.

There are five types of weather: Rain/Lightning, Sunny, Hail, Snow, and Fog. There are varying degrees of rain, including light rain, regular rain, and a lightning storm. Sims can splash and jump in puddles for a boost to the fun need, which can help put out fires in their town or water their plants. It can rain at any time of the year, but the amount of rain will vary by season. Most of the rain will occur in the springtime. When there are storms, lightning and thunder will occur. Simbots from Ambitions can interact with rain, however they can get electrocuted.

There are new transformative weather effects in the expansion, including wind. The sky is an indicator of what weather will take place; for example, clouds will get darker, which means the storm is approaching. Gardening can be affected by the weather. Snow and rain will gather on roadways. Cars will not slip off the road. Temperature will control how easily snow will accumulate on the ground or trees, or how quickly waters such as puddles will evaporate. In the Fall Sims can rake leaves.

The Sims 3: Seasons received "mixed or average" reception according to aggregator Metacritic, which gave the game a rating of 73 out of 100 based on 12 reviews.

Destructoid gave the game a "mediocre" score of 5 out of 10, citing a lack of new careers and public lots.

Jon Michael from IGN gave the game a 7.5 rating out of 10 and believes "The game is a solid gateway expansion that builds on the rules without overwhelming you, but still adds enough variety that you'll never want to play without it."

Amanda "StormyDawn" Hale from Worthplaying.com gave the game an 8.7/10 and claimed even though it isn't a large expansion pack, it is one that it is important for any Sims collection – "It's not the biggest expansion for Sims 3...but it may just be the most important."