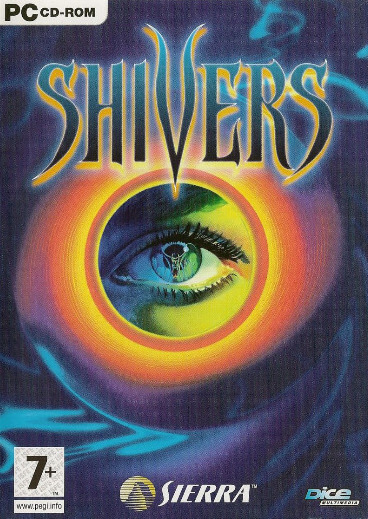 Shivers is a single-player horror-themed PC adventure game, released on CD-ROM by Sierra On-Line in November 1995. It was developed with Sierra's Creative Interpreter. Being the first Sierra first-person adventure game, Shivers was compared to contemporary Myst and The 7th Guest, gaining praise mostly for its atmosphere. The game takes place in a fictitious haunted museum.

Sir Hubert Windlenot was a peer of the British nobility, and as an archeologist, a member of the Royal Society. His interest in controversial fringe topics such as ancient astronauts, hollow earth, Atlantis and cryptozoology brought on him the reputation of a mad scientist. Renouncing his life as a noble, he moved to America, and attempted to open "Professor Windlenot's Museum of the Strange and Unusual" in Mt. Pleasant, Ohio, dedicated to his findings and theories. Construction took two decades to house both exhibits and thematic installations with several puzzles to entertain the visitors (such as an Ancient Egyptian-themed artificial lake, an underground maze that leads to a Dero installation, a greenhouse, or a diorama dedicated to Atlantis). The museum was never completed until the Professor mysteriously disappeared.

The player steps into the shoes of a teenager dared by his friends to spend the night on the grounds of the museum, that has been considered haunted.

Upon entering and exploring the museum, it is discovered that "fifteen years ago", in 1980 and while the Professor was in one of his excursions, two nerds from the local high school had broken into the museum and accidentally released evil spirits from an exhibited set of ceramic vessels from the Moche Valley. These spirits, known as "ixupi", drew the "life essence" or "Ka" from humans until trapped by a fictional South American indigenous people, the Zapana. Furthermore, the Ixupi are associated with chemical elements and materials, such as sand, metal, wood or electricity, which they can inhabit. These led to the demise of the unfortunate teens, and eventually of the Professor himself.

The player becomes tasked with finding a way to capture the ten spirits before the sun rises (though no actual time limit is imposed on the gameplay), and free the trapped ghosts of the Professor and the teens. This can be done by finding each vessel and its corresponding talisman/cover throughout all the museum, and where the respective Ixupi is hiding in order to trap it. In order to find all these items, the player has to explore the whole museum by passing puzzles of varying difficulty, mazes and secret passages. Along the way, the player can find in-game texts and documents chronicling the exploits of the Professor and the belongings of the two students expanding their backstory, with elements hinting at their lives, relationships and motivations.

At the end of the game the player captures the Ixupi of electricity from the power generator, causing an explosion. From the destroyed ruins, the player sees the friends approaching, looking for their friend, as the dawn breaks.

Playing in first-person perspective, the game is remarkably similar in style to the Virgin Interactive/Trilobyte production, the popular The 7th Guest, which introduced this style of gaming.

The only gameplay feature is an elaborate bar at the bottom of the screen which mostly serves as a health bar, showing how much "life essence" the player has or has lost; life is lost whenever the player encounters an Ixupi. It also serves as the game's inventory with the active Ixupi vessel or cover the player is currently holding, with the option to examine it in close-up. It also indicates progress in the game, as the vessels with the trapped Ixupi are placed there as trophies.

The vessels and their covers are the only items that can be picked up and stored in the inventory. Uncommonly for an adventure game, the inventory can hold only one of these items: a vessel, a cover, or a vessel combined with its cover. This means that the player can pick up a vessel and then find and pick up its corresponding cover to complete it; but if the player attempts to pick up an item that can't be combined with the one held (i.e. another vessel or a cover corresponding to another vessel), the items will switch positions. This feature obliges the player to take notes of where he has found or dropped which item, and to travel back and forth in order to pick them up.

Having a completed vessel the player can look for the corresponding Ixupi in order to trap it. Each vessel is marked with a Zapana pictograph representing a material, helping the player associate a vessel with an Ixupi.

The locations where the items are found are mostly fixed every time, although which is where is mostly random, ensuring a different gameplay each time the game starts.

A "Flashback" feature allows the player to review game cutscenes and re-read most of the in-game text that has been found, such as books from the museum library or the victims's notebooks. These not only advance the game's backstory but also contain hints to several of the puzzles.

In a somewhat of a deviation from other FMV-based games of the era, dialogues are provided with closed captions. This was a suggestion by Lead Game Developer Willie Eide who came from a deaf family.

Upon completion of the game's main story, the player may then continue to roam freely through the museum, with all captured Ixupis appearing along the health bar. One benefit of this is the luxury of getting to read over the many in game exhibit descriptions without the worry of being attacked by Ixupi. Reading these descriptions or exploring previously undiscovered parts of the museum can continue to add to the player's score.

Night at the Museum: Battle of the Smithsonian
hit
upd
new