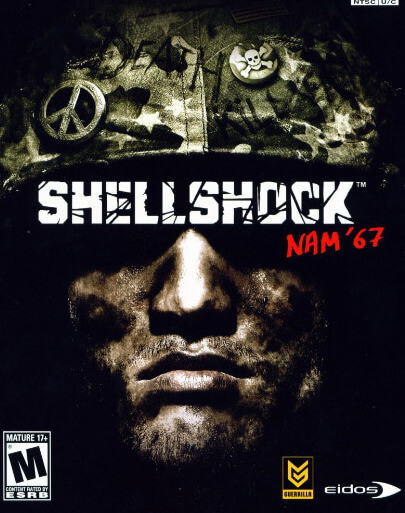 Shellshock: Nam '67 is a third-person shooter video game developed by Guerrilla Games and published by Eidos Interactive for Microsoft Windows, PlayStation 2 and Xbox.

The game starts in January 1967 in Saigon, South Vietnam. A CH-47 Chinook containing Caleb "Cal" Walker, the game's protagonist, and other G.I.s, lands at Tan Son Nhut Air Base in southern Saigon. Walker, along with his squad mate, Private "Psycho" Kowalski, are chosen by Colonel Salter, the CO, to participate in an air assault on a Viet Cong encampment within Kon Tum province. Walker and Kowalski are put under the command of Lieutenant O'Brien along with another G.I. nicknamed "Short Timer". As Caleb and his squad proceed through the area, a friendly fire incident, involving flawed mortar coordinates, forces another G.I. named Tomkins, to join the squad. Along with the help of a special operations squad made up of Sergeant Ramirez, "Tick Tock" and "Eyeball", they help the Waler and the others clear out the VC encampment. The encampment is soon after converted to a firebase which serves as a headquarters for Walker and his unit.

Soon after, the Walkers's squad is tasked with investigating VC activity in a nearby village. The squad is also charged with finding a journalist who had recently gone missing in the village. After learning about the dangers of booby traps, the squad then proceeds to the village. However, it becomes very clear that the villagers are aiding the VC when the squad is ambushed in the rice paddies just outside the village. After clearing out the VC, Walker begins the task of searching for weapon caches within the village. After finding numerous hidden weapons and supplies, the squad begins searching for the missing journalist, and shortly thereafter find him being held hostage by several VC. They jumped to the next task of seizing an old French fort being used as prisoner of war camp, after fighting through the valley entrance, clearing out multiple bunkers after an ineffective napalm strike failed to do, they assault the fort, Walker explores the basement and finds the P.O.Ws, after freeing them from their cells, he discovered one tied to chair with obvious signs of torture, he tells Walker that the N.V.A. has planted explosives in the basement in an attempt to demolish the fort, he escapes with seconds to spare.

The squad is then given orders to defend the fort from the N.V.A and Viet Cong. The enemy attacks later that night, Tompkins is sniped at the start of the attack, O'Brien is hacked to death with machetes in full view of Walker's squad, the attackers are repelled after Special Forces arrive. The next morning Walker is told to report to Sergeant Ramirez and joins special forces. They take on subversive, rescue, and assault missions. Walkers's final mission is to defeat General Diem, the game's main antagonist. He succeeded and delivered the General Diem's severed head to the base. Afterwards, Walker's chopper is shot down en route to China Lake, Walker escapes from NVA captivity and helps fend off a massive attack on base camp by both NVA and VC forces, an air strike is called in, leaving Walker and Monty, a friendly South Vietnamese soldier, as the only survivors.

IGN found the game to have 'many faults' and criticized the presentation of war as tasteless. Eurogamer also noted that the PlayStation 2 version was "a trivial representation of a bloody conflict for our personal entertainment" but thought that "when it hits the spot it's briefly thrilling" and admired the creators' ambition in at least attempting to make a game which was not bland and sanitised.

A sequel entitled Shellshock 2: Blood Trails was released in 2009.