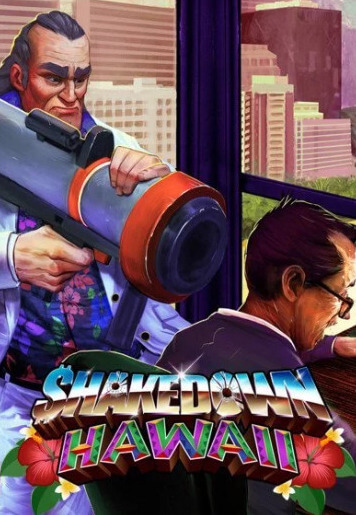 Shakedown: Hawaii is an open world action-adventure video game developed by Canadian studio Vblank Entertainment. Like its predecessor Retro City Rampage, it is a parody of multiple subjects, including retro games, 1980s pop culture, manipulative business practices, and Grand Theft Auto and similar games. Shakedown: Hawaii was released for Microsoft Windows, Nintendo Switch, PlayStation 4, and PlayStation Vita on May 7, 2019, and also for the Nintendo 3DS on September 19, 2019 in North America, and September 26, 2019 in Europe and Australia. It is the final game on the Nintendo 3DS released in North America, Europe and Australia.

Decades after founding Hawaii-based conglomerate Feeble Multinational and writing a best-selling business advice book, the aging and out-of-touch CEO of Feeble learns that his company is on the verge of bankruptcy, with online shopping, video streaming, and ride-share apps sapping Feeble's profits from its retail stores, VHS rentals, and taxi services. The CEO, together with his unemployed adult son Scooter and a henchman known only as "The Consultant", band together to rebuild Feeble into a corporate empire. Their arsenal of unscrupulous tactics includes violating consumer protection standards, razing buildings to make way for redevelopment, competing on a dangerous game show, destroying package delivery trucks, raiding a drug cartel, and shaking down other businesses. A subplot centers around the CEO’s son Scooter as he joins a gang and performs tasks for the gang’s leader, Tad.

Shakedown: Hawaii features an open world island with 16-bit style graphics, a top-down perspective, over 200 accessible buildings, and a destructible environment. In addition to a story mode following the three main characters, the player can break away from missions to free-roam the map and extort local businesses, use a variety of weapons to cause chaos, attempt arcade-like challenges and mini-games, purchase real-estate in a market that fluctuates in response, steal cars, or purchase clothing from stores. Combat is similar to Retro City Rampage, and involves using a wide variety of weapons to destroy enemies, vehicles, and property.

Shakedown: Hawaii has received reviews ranging from "generally favorable" to "mixed or average" depending on platform according to Metacritic.

Destructoid scored the game an 8/10. Reviewer Chris Carter praised the gameplay, visuals, soundtrack, and "relaxed emphasis on doing whatever you want", calling the game a worthy follow-up to Retro City Rampage that improved on many of its aspects. However, Carter noted there were some minor mission-interrupting glitches, and criticized the story's presentation: "I don't think the tritagonist focus (you play as the CEO's son and the company's main Winston Wolf fixer) really serves the narrative, nor does it make a meaningful statement against, say, GTA V's usage of the same conceit. … I mostly just found myself playing as the CEO as he is the crux of the tale."

Game Informer's Jeff Cork also gave the game an 8/10, highlighting the abundance of content and humorous tone, but describing the economy as unbalanced because it was possible to earn enough money to trivialize the acquisition of late-game purchases. In his summation, Cork stated, "The economy might be a little wonky, but Shakedown: Hawaii delivers a nice blast of classic arcade action and some solid laughs."