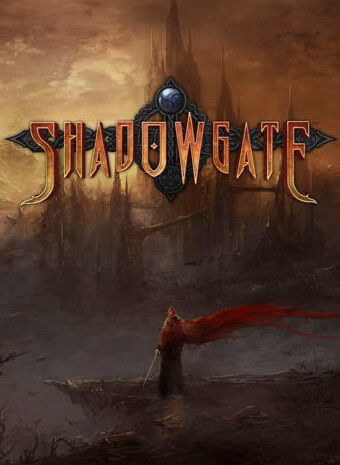 Shadowgate is a black-and-white 1987 point-and-click adventure video game originally for the Apple Macintosh in the MacVenture series. The game is named for its setting, Castle Shadowgate, residence of the evil Warlock Lord. The player, as the "last of a great line of hero-kings" is charged with the task of saving the world by defeating the Warlock Lord, who is attempting to summon up the demon Behemoth out of Hell. Later that year, a color version of the game was released for the Atari ST, and in 1989 for the Nintendo Entertainment System.

The player must solve a series of puzzles throughout the castle to proceed to the Warlock Lord's chamber. Due to the castle's perilous nature, at least one lit torch must be in the player's possession at all times. If the torch is extinguished, the player soon stumbles, breaking his neck, and must then continue from a saved game (or the area in which they died, in game console versions). Only a finite number of torches are to be found throughout the game, which effectively acts as a time limit to proceedings. Various items that can be acquired include a sword, a sling and other ancient weapons; though these weapons can not actually be used as striking weapons, they can be clicked on at the appropriate time to deliver a fatal blow to specific enemies.

The game is notorious for its many opportunities for death, including being burned by a dragon's breath, attacked by a cyclops, sucked into outer space through a broken mirror, dissolved by acidic slime, mauled by a wolf-woman, eaten by sharks, and suicide. Virtually any action taken by the player which is not the correct solution to a puzzle will result in a fatality. These deaths were often graphically described in the game's text (along with often sardonic and humorous comments), even in the NES version (in spite of Nintendo's policy of censorship at the time). Many of the game's puzzles rely on a system of trial and error, the problem of which is overcome by the ability to save the game state (as in most adventure games). Subtle hints can be found in books and the descriptive game texts. In the NES version, these are replaced by an outright hint feature which gives vague clues about what is noteworthy in any given room in the castle. The further the player progresses, however, the more useless this feature becomes, deteriorating into nothing but encouraging messages by the game's end. The NES version of Shadowgate also carries the distinction of being one of the few NES games to be available in a Swedish language version.

At the very beginning of Shadowgate, the only information the game provides the player is that,

"The last thing that you remember is standing before the wizard Lakmir as he gestured wildly and chanted in an archaic tongue. Now you find yourself staring at an entryway which lies at the edge of a forest. The Druid's words still ring in your ears: “Within the walls of the Castle Shadowgate lies your quest. If the prophecies hold true, the dreaded Warlock Lord will use his dark magic to raise the Behemoth, the deadliest of the Titans, from the depths of the earth. You are the seed of prophecy, the last of the line of kings, and only you can stop the Warlock Lord from darkening our world FOREVER. Fare thee well."

It's then up to the player to gather more information about the world through examining objects and reading any scrolls or books they come across. While reading some of the in-game books and scrolls are necessary to finish the game, others only provide exposition about the world Shadowgate takes place in. Reading the book Before Shadowgate, the comic book Shadowgate Saga: Raven, and playing the sequels Beyond Shadowgate and Shadowgate 64: Trials of the Four Towers reveals more details.

The world of Shadowgate

Shadowgate takes place in the fictional world of "Tyragon" where creatures from fantasy and myth live. In the land of "Kal Zathynn", on top of "Gatekeeper Mountain", is the living castle of "Shadowgate" where a group of powerful wizards known as the "Circle of Twelve" once met. One of the Circle of Twelve, "Talimar", became corrupt and was removed from the Circle. After that, he began to call himself "The Warlock Lord" and caused chaos across the lands by inciting conflict between humans, elves, dwarves, and the races on Tyragon. After those wars ended and the land began to rebuild, the Warlock Lord amassed an army of followers, including trolls, orcs, goblins, and other creatures. He waged war against the Kings of the Lands, and was defeated when the rest of the Circle of Twelve intervened. They sealed the Warlock Lord inside the caverns underneath Shadowgate, and then disbanded. The only wizard who remained was "Lakmir", who took on the role of Tyragon's guardian to ensure that the Warlock Lord's evil would not threaten the Lands again.

Years later, the Warlock Lord escaped from his confinement, and planned to raise the mightiest of titans, the Behemoth, from the depths of darkness to serve him. With the Behemoth, the Warlock Lord would escape Castle Shadowgate, and terrorize the planet once more. To keep this from happening, Lakmir sought out the last of the "Line of Kings", also known as "The Seed of Prophecy", who was foretold to stop the Warlock Lord and the Behemoth. Doing so would require the "Staff of Ages", a powerful artifact with enough power to slay the Behemoth that was hidden within Shadowgate. After finding this hero, Lakmir sends him to the entrance of Shadowgate to begin his quest.

It is up to the player to take on the role of "The Seed of Prophecy", enter Castle Shadowgate, solve its puzzles, survive its many traps, and stop the Warlock Lord once and for all. If they survive to the end, they will come across the Warlock Lord immediately after he succeeds in opening the gates of Hell and summoning the Behemoth. If the player was successful in finding the holy artifact called the Staff of Ages by this point, then they would be able to mortally wound the demon with it. As it dies, the Behemoth then drags the Warlock Lord with him into Hell. The player returns victorious, where he is betrothed to the King's daughter and entitled High Lord of the Westland.