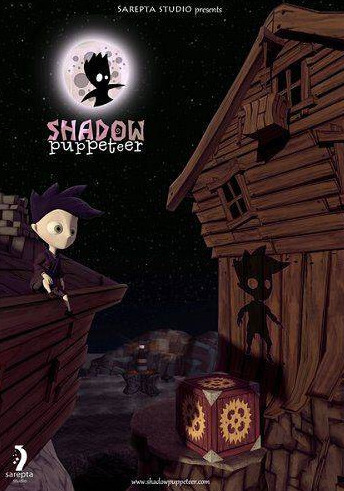 Shadow Puppeteer is an adventure puzzle platformer video game developed by the Norwegian independent developer Sarepta Studio for Microsoft Windows and Wii U. The PC version has been released September 29, 2014. The Wii U version will be released on January 28, 2016 Worldwide.

The game can be played both in single-player mode or shared screen local co-op. A boy and his shadow have to cooperate to make their way and find the evil shadow puppeteer. Together they need to solve puzzles based on manipulating three types of lightsources and three shadow tools called "stencils" in-game. The puzzles are a mix of 2D and 3D, as the boy is free to move in any direction, while the shadow is limited to being projected on 2D surfaces and using shadows cast by objects as platforms. Moving an object also moves its shadow. Similarly, moving a shadow can move the object casting it. In order to solve the puzzles, the players can also manipulate the light sources and alter the dimensions of the shadows.

On their way, the boy and the shadow pass through 5 different worlds. Each world introduces new elements the players need to master. An example would be a shadow scissors which allows the shadow to cut shadow strings. Another element would be the shadow bombs, which allow the shadow to destroy both the shadow of a wall and the wall itself. In their path, the two characters also have to fight shadow monsters.

Even though each character can act independently, the two are connected with a string. Increasing the distance too much leads to the string snapping and the player having to start the level over. The two characters share similarities, but each have their own limitations and abilities.

The story starts in the evening, as an evil man, the shadow puppeteer, arrives in the village. The atmosphere is dark, whimsical and gloomy. The puppeteer plays his music box and harvests the shadows of everyone in the village. Only the main character, a little boy, still has his shadow. He falls through the floor and becomes separated from his shadow as the puppeteer tries to harvest it. The music box breaks so the puppeteer leaves without the boy's shadow. The game consists of the boy's and the shadow's journey to find the shadow puppeteer and free the stolen shadows. On their way, they go through five worlds, fight shadow monsters and cooperate to solve physics puzzles based on manipulation of light and shadow. The story is told without any actual dialogue or text, but with the help of visuals and music.

Initially conceived as a student project at Hedmark University College, Norway, the game has been in development since 2010 when the Sarepta Studio was founded. The developer, Sarepta Studio is a 3D visualization firm and independent video game developer based in Hamar, Norway. The development of the game was funded by Nordic Game Program, Innovation Norway and the Norwegian Film Institute.

Since its release, the game has received mixed to positive reviews, receiving a Metascore of 57%. While the game has been praised for original gameplay, level design, the music, whimsical cartoony art and gloomy atmosphere, there has been some negative feedback. The complaints have mostly been related to the game being too difficult in single player mode, demanding controls and placement of checkpoints. A major update has been released 14 September 2015, addressing some of the issues mentioned by reviews. Destructoid awarded it a score of 5 out of 10, saying "Shadow Puppeteer tries to do interesting things, but ultimately comes off as unpolished, bland, repetitive, and mediocre."