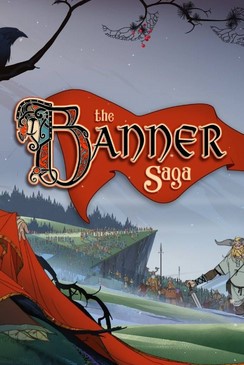 The Banner Saga is a fantasy tactical role-playing video game developed by Stoic Studio and published by Versus Evil. It was initially released for personal computers and mobile phones in January 2014. PlayStation 4 and Xbox One versions were released in 2016, with a Nintendo Switch version released in 2018.

Taking place in a fictional world inspired by Norse mythology, the game tells the story of the player's caravan as a whole, as they combat a warlike race named Dredge that despises humans. The game follows two playable characters, each having their own story that ultimately merges into one. The game features an interactive story which changes depending on players' decisions.

The game served as the debut title for Stoic Studio, which was founded by three former BioWare designers. The game was funded via Kickstarter, a crowdfunding platform. The hand-drawn animation and art-style featured in the game was inspired by the art of Eyvind Earle, Ralph Bakshi and Don Bluth. Austin Wintory composed the game's music, with Dallas Wind Symphony performing. The game's multiplayer component, titled The Banner Saga: Factions, was released as a free standalone game before the game's release.

The game received critical praise upon release, with critics praising the game's art style, combat, and story. The game was followed by The Banner Saga 2 (2016) and The Banner Saga 3 (2018), which concluded the series. A tabletop RPG tie-in miniseries, produced by Hyper RPG, aired from July 24 to August 14, 2018 on Twitch.

The Banner Saga is an interactive story, meaning that several events may or may not happen depending on the player's choices. The game follows two playable characters, each having their own story that ultimately merges into one. The core of the game is a single-player campaign of turn-based combat engagements inspired by games such as Final Fantasy Tactics and Shining Force, with the player controlling and being able to build up a party of characters with complementary abilities. The game deliberately avoids certain conventions of action-oriented computer role-playing games such as the focus on a young lone hero's story, looting and buying items, or reloading a saved game state after defeat. Instead, the developers intended to tell the story of the player's caravan as a whole, and encourage players to accept and deal with the consequences of any defeats they may encounter.

The Banner Saga centers on the return of the Dredge - a warlike race that despises humans - led by Bellower, a nigh invincible Dredge who leads them on a warpath. As a wandering army sent to fight against the Dredge and find a weakness for Bellower, the caravan make many difficult decisions that would shape the fate of both man and Varl. Meanwhile a darkness starts to encompass the world as a giant serpent causes massive earthquakes and breaches across the lands.

The turn-based multiplayer combat component was released on Steam as a free standalone game, called The Banner Saga: Factions, prior to the release of the single-player game. Factions became available to backers on February 18, 2013 and to the public on February 25. It allows players to pit teams of six combatants, chosen from 16 classes, against each other. Factions uses the city of Strand as its main user interface, with players selecting different buildings of the city to access various playmodes and functionalities. Additionally, according to Stoic, "the city will evolve as the story unfolds".

The game takes place in a Viking legend-inspired world, stuck in a perpetual twilight since the sun stopped moving weeks before the events of the game, mainly populated by humans and giant-like creatures called the Varls, as the Dredge, an ancient race believed to be extinct for ages, returns to kill them all.

On the west, the Varl Vognir, together with several other companions that include his longtime friend Hakon, the retired Varl warrior Ubin, and the resourceful human Eirik, are charged with escorting Ludin, Prince of the human capital Arberrang, to the Varl capital Grofheim in order to seal an alliance between the two races. In the city of Vedrfell however, Vognir is slain in an encounter with Dredge, leading Hakon to take command of the caravan. Continuing their way, the caravan faces many of the Dredge, and, while exploring the city in ruins of Ridgehorn, find an unconscious man next to a woman's dead body on the top of a tower. As they rescue him and continue their way, the man, Eyvind, unsuccessfully implores Hakon to return to Ridgehorn, convinced his companion is still alive. The caravan reaches Grofheim, to find it aflame and completely overrun by Dredge.