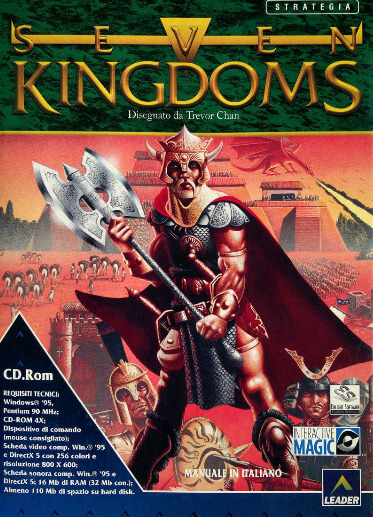 Seven Kingdoms made departures from the traditional real-time strategy model of "gather resources, build a base and army, and attack" set by other RTS games. The economic model bears more resemblance to a turn-based strategy game than to the traditional "build-workers, and harvest-resources" system in games such as Command & Conquer, StarCraft, and Age of Empires.

The game features an espionage system that allows players to train and control spies individually, who each have a spying skill that increases over time. The player is responsible for catching potential spies in their own kingdom. Inns built within the game allow players to hire mercenaries of various occupations, skill levels, and races. Skilled spies of enemy races are essential to a well-conducted espionage program, and the player can bolster his or her forces by grabbing a skilled fighter or give one's own factories, mines, and towers of science, a boost by hiring a highly skilled professional. For instance, having a skilled Persian general can make capturing and keeping a Persian village much easier.

The diplomacy system within the game is akin to a turn-based game allowing players to offer proposals to another party in which they are able to choose either to accept or reject them. Each kingdom has a reputation and one suffers a penalty for declaring war on a kingdom with a high reputation - making a player's people more likely to rebel and more susceptible to bribery. Diplomatic actions include making war, proposing an alliance or friendship treaty, buying food, exchanging technologies, offering tribute/aid, and forging trade agreements. A ranking system allows all players to gauge the relative military and economic strengths of their allies and enemies, making alliances against the stronger players a natural option.

The original game allows players to choose seven different cultures to command (see below for cultures added at a later date). Players can choose between the Japanese, Chinese, Mayans, Persians, Vikings, Greeks, and Normans. Each culture has its own weapons and fighting styles. Each culture can also summon its own "greater being", each having different powers.

Fryhtans are fictional beasts that hoard treasure and hold "scrolls of power", objects that enable you to summon greater beings. They are quite powerful and may attack human kingdoms.

Interactive Magic later released a free patch that added three new cultures, the Egyptians, the Mughals and the Zulus, and a new war machine, called the Unicorn. The game was re-released on June 8, 1998 under the name Seven Kingdoms: Ancient Adversaries with this patch included.

Villages within each kingdom have taxes collected whenever a village's average loyalty reaches a certain level. The game allows the player to automatically tax a village at any multiple of 10 between 40 and 100. If a village (or any other unit) has loyalty below 30, there is a risk of rebellion. Normally, a village's loyalty can be determined by a number of factors including the number of races living in the village, the leadership and race of any generals/kings in any forts near the village, availability of jobs and goods, and the player's reputation. The presence of enemy generals/kings can decrease the loyalty of your village while friendly ones have the opposite effect.

In addition, the player can temporarily increase a village's loyalty beyond the nominal level (the increase is roughly 10 units), granting it funds, and whenever the player taxes the village its loyalty decreases (again by 10 units). The rate at which loyalty returns to normal is determined by the difference between the current loyalty and the nominal loyalty. So, if the tax setting on the game is set at 40 and a village's nominal and current loyalty are at 100, then loyalty will drop very quickly to 30 and increase at a relatively quick pace from 30 to 40, and cycle between those values. However, if the player then sets the tax rate to 100, loyalty will increase from 30/40 to 100 at a gradually decreasing rate, and subsequently cycle between 90 and 100 at a more sedate pace. The player will earn more revenue over a given period of time if he or she sets his/her tax rate to 40. Most importantly, the player's nominal loyalty is subject to rapid spikes. If the player's reputation drops because he/she kill civilians, declares war, loses a spy, or if the village is attacked, then the player will see a sudden drop in current loyalty, which could easily put the player under the rebellion threshold.

In the event a king is killed, a replacement king with the same skill in leadership is needed. Otherwise, military and peasant loyalty can drop. The consequences of replacing the king with a less powerful one can be rebellion, susceptibility of villages and military units to spies, and increased risk that soldiers outside of a fort will desert and change sides because of dropped loyalty in response to the replacement king. Training replacements and military leaders is time-consuming and expensive, which may explain why many players rely on military machines.

Raw materials are harvested from mines and then transported to factories. The resources are copper, iron, and clay which can be sold to the surrounding kingdoms. Mines and factories have a maximum capacity of eight workers, and have a limit as to how many raw materials that can be stored. Initially, miners are more efficient than factory workers where a small number of miners should be able to keep an entire factory of eight workers productive. Alternatively, a player could build several factories to process the output from a single full mine. Either way, one should watch raw material stocks and work to remove bottlenecks as they occur. Idle workers in a factory or mine incur an opportunity cost in terms of food they could be producing as peasants. Foreign workers must also be paid wages.