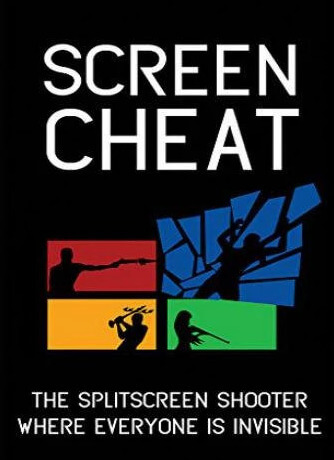 Screencheat is a first-person shooter video game developed by Samurai Punk and published by Surprise Attack. The game was released for Microsoft Windows, OS X, and Linux in October 2014 and was released for PlayStation 4 and Xbox One in March 2016. The game was later ported to Nintendo Switch, with enhanced graphics and updated interface, under the name Screencheat: Unplugged, in November 2018.

Screencheat is a multiplayer first-person shooter video game, in which every player's character model is invisible. However, the viewpoints of all players are shown on the screen, encouraging players to use this feature to deduce their opponents' location. The maps are brightly colored in order to make it easier to figure out where a player is.

Screencheat includes several different gamemodes. Some, including Deathmatch, King of the Hill, and Capture the Fun (where players fight for possession of a piñata), are multiplayer FPS standards. The game also has a handful of unique gamemodes, such as One Shot, where each player is limited to one shot and cannot reload until a certain amount of time, and Murder Mystery, in which players have to kill a specific opponent with a particular weapon.

Screencheat was developed by Australia-based studio Samurai Punk and published by Surprise Attack. The game's inception came from the 2014 Global Game Jam, where it received several awards and honourable mentions. The game was released for Microsoft Windows, OS X, and Linux on 21 October 2014. Prior to release, a free public beta period ran from 4 August 2014 to 3 September 2014. It was released for PlayStation 4 and Xbox One on 1 March 2016.

Screencheat received an average reception from critics upon release. Critics praised the game for building an enjoyable experience around a single novel idea, but they also criticised the game's lack of depth, and limited replayability.