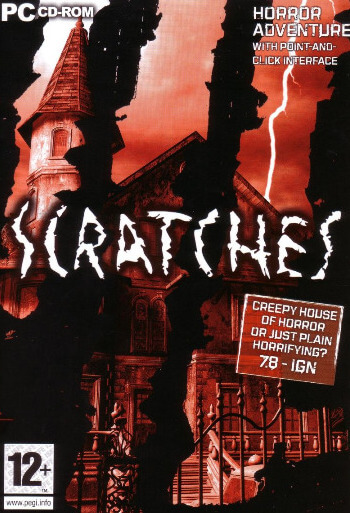 Scratches is a mystery adventure computer game by game developer Nucleosys. Scratches is the first commercial adventure game ever to be made in Argentina.

The game tells the story of the Blackwood estate on the outskirts of Rothbury, a small rural town in Northumberland, England in 1976.

Originally owned by James T. Blackwood in 1963, the house is passed to Christopher Milton after Mr. Blackwood is accused of murdering his wife. A couple of days later, Mr. Blackwood dies of a sudden heart attack though some in the town start rumors that he might have committed suicide. The police decide to close the case seeing there is no further evidence left. Shortly after acquiring the house, Milton inexplicably disappears in 1970 leaving no visible trace.

The player assumes the role of the house's next inhabitant, Michael Arthate, an author seeking seclusion to work on his next book. He moves in only to find that the house still echoes its horrible past quite literally as scratches are heard all around, particularly in the basement and fireplaces, and soon becomes more interested in researching the house's history than his writing.

In the end, it is revealed the scratches were being caused by Robin, the deformed son of James and Catherine, who was locked in the basement. Michael flees the house after this discovery, finishes his novel, and becomes a prolific novelist as a result from his encounter.

Originally, the player was supposed to use an amulet to kill Robin, turning him back into a human. They would themselves die if they weren't able to figure the puzzle out. Lead developer Agustin Cordes said the ending was "completely unfair in terms of design," and it was subsequently abandoned.

In the Director's Cut edition of the game, a sidequest called "The Last Visit" continues the narration from where Michael had fled. A reporter is sent to uncover the mysteries of Blackwood Manor before it will be destroyed. The place has become a scene of ruin; full of looting, vandalism, and graffiti. The reporter ultimately discovers Robin, who chases him until Milton appears at the manor to speak with Robin. Robin leaps onto Milton and presumably kills him as the reporter escapes. Blackwood Manor is then demolished and the reporter notes that the mystery of a mask found inside the home remains unsolved.

James Thomas Blackwood: An eccentric gentleman, Mr. Blackwood had always been a prominent figure in Rothbury, his hometown since his childhood, being one of the most successful construction engineers in the region.

Christopher Edward Milton: An intimate friend and long-time doctor to the Blackwood family.

William Bailey: Mr Bailey, a now-retired police chief, was in charge of the investigation of the death of Catherine Blackwood in the early 1960s. He was convinced of Mr Blackwood's guilt, but was never able to convict him.

Michael Arthate: Michael is an up-and-coming writer. Sales of his acclaimed first novel, Vanishing Town (a reference to Dark Fall), left him with enough wealth to acquire an imposing Victorian mansion, a long-time dream of his.

Barbara Stiles: Michael hired Barbara as his assistant to aid him with fan mail and to contact magazines around the world, offering them his short stories.

Robin Blackwood: The son of James and Catherine Blackwood who was kept hidden from the public due to his deformities.

Scratches uses a first person perspective to navigate around the house. Using only a mouse, the player can access various rooms and other places in order to solve the mystery of both Blackwood and Milton's disappearances. It features music and special sound effects by the now defunct Cellar of Rats, which contribute to the fearsome ambience experienced at the mansion, crypt, greenhouse and church.

The game is heavily influenced by the H.P. Lovecraft mythos and several direct references to Lovecraft works make their appearances in Scratches. There are in-game references to the Necronomicon, De Vermis Mysteriis, Lovecraft's story "The Mountains of Madness," as well as one critics of Michael's book being called R'yleh. Michael states in the game he had just moved to Rothbury from Providence, Rhode Island-the hometown of Lovecraft.